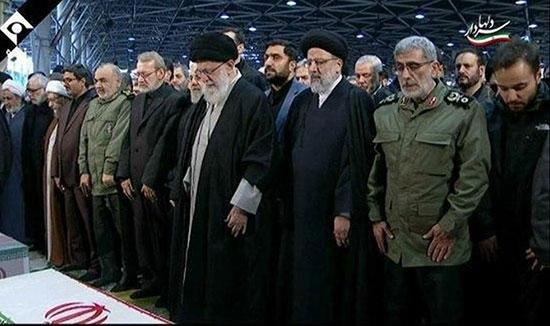 Iran’s regime knows that most Americans do not want war. The regime also knows it is not secure and could be targeted.

Iran has gambled with an early morning attack on two US bases in Iraq in response to the United States killing Iranian general Qasem Soliemani. Reports say that more than a dozen ballistic missiles were launched by Iran at Ayn al-Assad base and US forces stationed in Erbil, the capital of the Kurdistan Regional Government. This is a major roll of the dice for Tehran, which hopes the US will not respond – or at least not with a massive retaliation.

Iran’s regime knows that most Americans do not want war. The regime also knows it is not secure and could be targeted.

Iran used ballistic missiles, its weapon of choice, perfected over years of tests, the same missiles used in Yemen and against ISIS and Kurdish dissidents.

Iran fired ballistic missiles at ISIS in Syria in October 2018. It also used missiles against the Kurds in Koya in September 2018. Reports indicate that Iran also sent ballistic missiles to Iraq in August 2018 and again in December 2019. These missiles threaten the wider Middle East, including Israel and Saudi Arabia, and US bases in the Gulf, Jordan, Syria and elsewhere.

Iran’s rocket and missile program is one of its most sophisticated indigenous defense programs. Along with drones, Iran is a rocket pioneer and has sought to equip Hezbollah with precision guided munitions.

This is why Iran chose to attack the US with its missiles. They are precise and can be deadly. But Iran knows it doesn’t have an air force or navy that can confront the US. It has missiles, drones, large numbers of infantry in the Islamic Revolutionary Guard Corps and its regular army, called the Artesh.

Iran has allies in the region, such as the 100,000 strong Popular Mobilization Units in Iraq, a mostly Shi’ite group of militias. Some of these groups have been designated terrorists by the US. Kataib Hezbollah has already been accused of around a dozen rocket attacks on US bases in the last year in Iraq. The US killed Kataib Hezbollah leader Abu Mahdi al-Muhandis in the same strike that killed Qasem Soleimani.

Iran has gambled in the past.

It has fired rockets and launched drones at Israel and Saudi Arabia. It has also used its proxies to attack the US with rockets since 2018 in Iraq. It has expected there won’t be a response.

The recent crises began with a December 27 rocket attack on US forces in Iraq near Kirkuk. The US responded with airstrikes on Kataib Hezbollah and then Iraqi pro-Iranian militia members stormed the US embassy compound in Baghdad. The US killed Soleimani and Muhandis in response to that. Now, the January 8 ballistic missile attack is Iran’s latest move.

Iran knows that the death of Soleimani cannot go unanswered. It has seen tensions rise with the US for a year. In May, Iran began by attacking oil tankers. It continued its attacks in June and downed a US drone. It fired rockets at Saudi Arabia in May, and again in September, using drones and cruise missiles.

It waylaid a British ship. It carried out 12 rocket attacks in Iraq.

So, Iran has already carried out many attacks, it is just that most of them were small and calculated. Iran wanted  to know how the US would respond. When US President Donald Trump decided to hit Soleimani and Muhandis the rules of the game changed.

What are some of the ballistic and other missiles that Iran has? The Fateh-110 and Zolfaghar, Qiam 1, Shahab-3, Fajr 3 and Fajr 5. The range in sophistication from less accurate to precision missiles and from short- to long-range. Iran also has long-range cruise missiles, such as he Hoveizeh of the Soumar series. The Shahab 3 is supposed to have a range up to 1,000 km and the Hoveizeh has a similar range even though Iran boasts of even greater ranges for its missiles and cruise missiles.

Now, Iran must decide what to do next. It has pulled the trigger on the first major attack from Iran targeting Americans.

Iran’s regime usually prefers ambiguity. It likes recruiting proxies such as Hezbollah or the Houthis in Yemen to use missiles so that it can have plausible deniability. Even when its drones attacked Saudi Arabia in September, it asked the Houthis to take credit. Iran never likes to do things itself, it wants others to fight and be the target of reprisals. That is why it was so outraged by Soleimani’s death.

And this is why the regime has gambled on Wednesday to strike at US forces in Iraq, hoping that the US doesn’t want to push the crises deeper and start a conflict in Iraq against lightly defended US bases there.

Iran must also be careful not to anger and alienate Iraqis. The attack on Erbil could stoke tensions in the Kurdistan region. Initial reports indicate the rockets that fell in Erbil did not do much or any damage. The major attack was at Ayn al-Assad base.

Trump spoke at that base in December 2018, one of the reasons it may have been chosen as a symbolic and meaningful target.