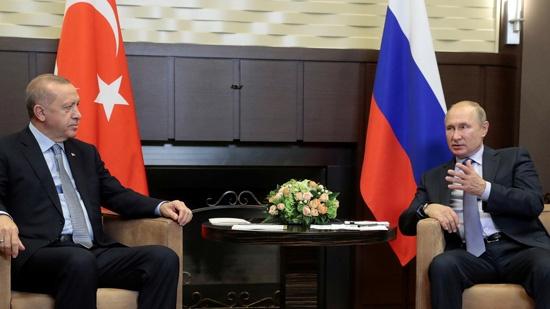 Arriving in Turkey for the grand opening of a gas pipeline, Russian President Vladimir Putin is expected to discuss the recent escalation of the US-Iranian conflict in Iraq with his Turkish counterpart Recep Tayyip Erdogan.

Putin’s visit was scheduled in advance, and involved the ceremonial opening of ‘Turk Stream,’ a natural gas pipeline running under the Black Sea from Russia to Turkey. He was also scheduled to meet with Erdogan in Istanbul and discuss the security situation in the region.

However, Iraq suddenly shot to the top of the agenda overnight, as Iran fired off two volleys of missiles at US bases in retaliation for the US drone strike that killed Islamic Revolutionary Guard Corps General Qassem Soleimani at a Baghdad airport last week.

As night fell in Washington, it looked like neither the US nor Iran wanted to escalate things beyond that, but a possible hot war between the two is certainly a cause for concern to both Moscow and Ankara.

“Our region is tired of constant clashes, from the intervention of external forces,” Erdogan’s spokesman Ibrahim Kalin told reporters earlier in the week, adding that Turkey urged both Iran and the US to “reduce tensions.”

Another hot topic is Erdogan’s decision to intervene in Libya. Turkey is seeking to prop up the Government of National Accord (GNA) in Tripoli, the internationally recognized regime that has been reduced to control over the capital, while the Libyan National Army (LNA) of General Khalifa Haftar holds most of the rest of the country. Haftar has declared jihad in response, and vowed to drive out all foreign “invaders.”

Erdogan and Putin also don’t see entirely eye to eye on Syria. The Turkish leader has been unhappy about the Syrian Army’s drive into Idlib, the last remaining stronghold of the Turkish-backed “moderate rebels” that include Al-Qaeda affiliates. Kalin said that Turkey does not see President Bashar Assad as “the leader capable of taking the country into the future.”

Russia, on the other hand, backs the government in Damascus, where Putin stopped for a brief, surprise visit on Tuesday. After a special military briefing, Putin and Assad took a walk, visiting a historic mosque and an Orthodox cathedral.