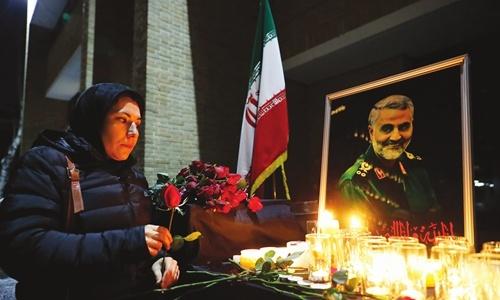 Chinese analysts and a former diplomat warned increased risk of a suddenly intensified situation between the US and Iran after the latter hit two US military bases in Iraq on Wednesday morning.

They called for restraint from both sides to avoid repeating the same old disaster of the First World War.

Iran launched more than a dozen missiles at two Iraqi bases that hold US troops in what appears to be revenge to the US killing Iranian major general Qasem Soleimani, Iranian media reported.

US President Donald Trump tweeted following the attack, saying “All is well!” and noting “We have the most powerful and well equipped military anywhere in the world.”

Former Chinese ambassador to Iran and Middle East studies expert Hua Liming told the Global Times that at the moment, it is crucial how the US will respond to Iran’s retaliation.

There will be a high risk of war if the military actions of both sides are out of control, which is very dangerous for the whole world. Therefore, “this is a critical juncture,” said Hua, noting that it is a significant moment to test the wisdom of the US and Iraqi leaders.

“World War I was triggered by a small event that eventually led to a major war involving many of the world’s great powers, which should serve as a warning,” Hua said.

Explaining the reason behind Iran’s military operations, Hua said military retaliation was a natural result because Iranian leaders had no other option after the US killed Soleimani which provoked outrage of Iranian people.

Now that the US Congress, public opinion and the upcoming election will also pressure Trump, the US will surely take further measures, the former Chinese ambassador said.

“The key is to what extent will the US retaliate, and if it will move to deescalate the situation,” Hua said.

It is still difficult to predict how the situation will unfold, as the US has wide military presence in the Persian Gulf, Hua said.

Yang Xiyu, a senior research fellow at the China Institute of International Studies in Beijing, told the Global Times that after the US killed Soleimani and then Iran launched attacks on US military bases, irrational factors in both countries’ domestic politics are rapidly increasing.

If this does not stop, a war seems inevitable, Yang said, noting that it is important that both Iran and the US as well as international society put an immediate stop to the current trend of escalation.

“At the 100th anniversary of the end of World War I, many analysts said if decision-makers at that time knew it would trigger a world war, they would not do it. But all of these are only hindsight. No matter who made decisions, the situation might just continue step by step,” Yang said.

Neither Washington nor Tehran is ready and has the intention to start an all-out war, but if they let domestic “politically correct” and irrational sentiments grow freely, it will inevitably lead to a war where it gets out of hand, he said.

“Leaders of both countries are facing a historical test: they need to find a balance that does not deviate from each other’s domestic political sentiment, but also shoulder the historical responsibility to protect the long-term interests of their countries and regions and find a way out of this crisis. This requires courage and wisdom,” Yang said.

The UN and other related major countries should also mediate to prevent an escalation, Yang said.