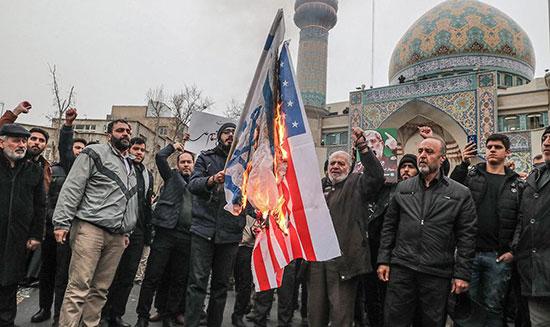 Opinion: Iran’s slain general would have been shocked to find out that an attack on U.S. bases in Iraq, which didn’t claim a single American life, was the full extent of the Islamic Republic’s response to his killing; all sides, it appears, are eager to move on

Iran’s Major General Qassem Soleimani would have been devastated to learn his surviving colleagues at the top of Iran’s government considered the firing of 20 missiles at U.S. bases a “proportionate response” to his assassination.

Whether Tehran’s military response is truly complete, of course, remains uncertain; although Foreign Minister Javad Zarif was unusually clear in tweeting shortly afterward that the strikes “concluded a proportionate response”.

Even if it is, the question is whether President Donald Trump will go through with his own Twitter threats to unleash overwhelming U.S. strikes – including against cultural sites – in retaliation.

The lack of U.S. casualties, together with the president’s own tweet following the strikes and his speech at the White House hours later, suggests that will not happen.

If further direct military action can be avoided, that would be a relief to many in Washington and across the region – and, in some quarters, seen as something of a vindication of the decision to strike.

Had Soleimani not been killed, supporters of the action will maintain, the United States could have been trapped in a dangerous cycle of escalation in Iraq that could have killed many more.

Whether or not that is true, is, frankly, impossible to know.

Even if the immediate crisis now begins to de-escalate, both Washington and Tehran face difficult decisions in the weeks to come.

Iran has pledged to resume nuclear enrichment in a way that could easily plunge the region back into dangerous confrontation, while the United States must manage an Iraq now openly demanding the withdrawal of U.S. forces.

Behind the scenes, perhaps inevitably, what may really drive events are domestic politics in the United States, Iran, and Iraq.

For Trump, the strike on Soleimani looks unlikely to do him any harm in an election year.

Neither, however, would scaling back or even ending America’s military presence in Iraq, or indeed across the rest of the Middle East.

To do so, critics argue, would hand Iran the major strategic regional victory it has craved, and for which Soleimani – head of Iran’s Islamic Revolutionary Guard Quds Force – worked so bloodily for years.

What is much less clear, however, is whether Trump would care – and whether such a turn of events would exacerbate or intensify the proxy confrontations such as Syria and Yemen where that face-off has long been fought out.

And in truth, of course, Washington has already been significantly pulling back its involvement in almost always confrontations, most notably through the withdrawal of U.S. troops from Syria last year.

In Yemen, the United States has already ceased refueling Saudi jets, while European states, particularly Germany, have scaled back or stopped military exports to Riyadh.

Across the Western world, fatigue with two decades of entanglement in the Middle East has long been growing.

Proxy confrontations will continue, but they may do so largely fuelled by local actors and with much less involvement by the United States and its allies.

That doesn’t mean they will not escalate. The last month has seen Turkey send troops to pitch into Libya’s civil war, in which Qatar and the United Arab Emirates have long been on different sides, with other nations pulling the strings increasingly believed to include Russia and Italy.

There’s no reason yet to suspect Soleimani’s death will significantly reduce Teheran’s involvement in Yemen or Iraq.

Recent months have seen growing anti-government protests in both Iraq and Iran, with Soliemani seen a major driver of the brutal and often lethal response to both.

That was believed to have been a factor in his decision to step up attacks on U.S. forces in Iraq through local Shi’ite militias, which prompted U.S. airstrikes that were followed by mob attacks on Washington’s embassy.

The nightmare scenario the United States feared perhaps the most – an overwhelming assault on its embassy prompting a humiliating Saigon-style withdrawal months before November’s presidential election – now looks much less likely.

But much will depend on how Iran chooses to approach the nuclear issue in particular. There are still plenty in Washington who would like to tighten sanctions further in the hope of bringing in outright regime change, although Trump is not necessarily among them.

European states will be hoping for a different approach, perhaps nudging all sides back towards a renewed version of President Barack Obama’s nuclear deal.

The further strengthening of Europe’s keystone “E3” alliance on Iran – Britain, France, and Germany – may be amongst the greatest legacies of the decade’s first international crisis.

Perhaps even more important, however, is the emergence of what might be termed a “Trump Doctrine”. The president is now much less encumbered by advisers like former Defense Secretary Jim Mattis to stay his hand or influences his thinking.

Faced with a confrontation, Trump was clearly willing to countenance more aggressive direct action than almost any of the U.S. foreign policy community would have embraced.

He may follow that, however, by withdrawing America from the region still further. That’s an approach America’s allies and potential foes alike will ponder, and it will not necessarily make the world a safer place.

Those like Soleimani who thrive on driving instability should also pause to think, however.

The slain general clearly felt himself untouchable, and would almost certainly have assumed his killing would spark even greater bloodshed. Instead, for all the mourners at his funeral, it is hard not to notice just how quickly all sides, including his own, are wanting to move on.

This article was written by Peter Apps, global defense correspondent for Reuters news.