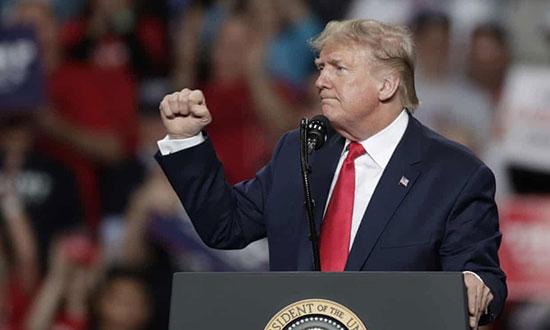 is a Serbian-American journalist, blogger and translator, who wrote a regular column for Antiwar.com from 2000 to 2015, and is now senior writer at RT.

Whatever caused Flight 752 to crash just after takeoff from Tehran, the 176 people who died were quickly drafted as elements in a propaganda narrative targeting both Iran, Russia and US President Donald Trump.

The Ukraine International Airlines (UIA) Boeing 737 took off from Imam Khomeini International Airport in Tehran on Wednesday morning. It was bound for Kiev, amid rising tensions over the Iranian missile strikes against US targets inside Iraq. The nine crew members and 167 passengers on board, including 15 children, may have complained that the flight was running almost an hour late. Within seven minutes, they would all be dead.

Initial reports spoke of “technical problems” as the cause. By Thursday morning, however, the narrative was shifting: US officials were “confident that Iran shot down a Ukrainian jetliner,” CBS reported citing anonymous sources.

AP qualified the speculation as “highly likely,” a weasel phrase made notorious by the official UK narrative of the 2018 Salisbury “novichok poisonings.”

By the time the New York Times got to it, though, the qualifications have disappeared: “An Iranian missile accidentally brought down a Ukrainian jetliner over Iran this week, killing everyone aboard, American and allied officials said on Thursday…”

Then it was Canadian PM Justin Trudeau’s turn. He told reporters that “intelligence from multiple sources… indicates that the plane was shot down by an Iranian surface-to-air missile.”

It was textbook “citogenesis” at work, the manufacturing of a narrative through circular reporting and reliance on published assertions as proof.

Yet just the day before, Reuters had been reporting something completely different, citing an anonymous “Canadian security source.”

“The initial assessment of Western intelligence agencies is that the plane was not brought down by a missile. There is no evidence to suggest that,” said the source, adding that a “technical malfunction” was the likely culprit. Iranian civil aviation authorities likewise said that no missile debris was found at the crash site, and that rumors of a missile were “illogical” and “scientifically impossible.”

Instead of being skeptical of anonymously sourced claims by intelligence agencies – which have a stellar record of being wrong on major issues, from the Douma “chemical attack” and Iraqi “weapons of mass destruction” to the whole sordid ‘Russiagate’ mess – mainstream media outlets in the West happily ran with the “Iran shoots down airliner” angle. Some went even farther, adding that a “Russian missile” was involved.

Soon enough, the “verification” wizards at Bellingcat were involved in parsing “open source evidence” of course. Photos and videos of missile parts and alleged strikes quickly made rounds online, amplified by mainstream outlets, to cement the Narrative that was already becoming weaponized.

Even as they took the claim about an Iranian missile at face value, Democrats were quick to blame Trump for the deaths on board Flight 752, and explain how the passengers and crew were somehow caught in a “crossfire” – though the crash happened hundreds of miles away and hours after the Iranian missile strikes.

Republicans, on the other hand, used the Narrative as proof that the “regime in Tehran” was monstrous, justifying Trump’s decision to launch a drone assassination of Iranian General Qassem Soleimani last week. Gone was their skepticism towards intelligence agencies that had been caught red-handed abusing procedures to spy on the Trump campaign and cook up ‘Russiagate.’

At this point, with the media narrative established, and policy decisions based on it no doubt to follow, it won’t matter what the actual investigation on the ground finds. The truth about the Iraqi WMDs or Douma “chemical attack” didn’t bring back the deaths the lies about them had caused. It won’t bring back those 176 unfortunate souls who perished horribly at dawn on Wednesday – only to find themselves posthumously conscripted as fighters in a propaganda war.

Subscribe to RT newsletter to get stories the mainstream media won’t tell you.