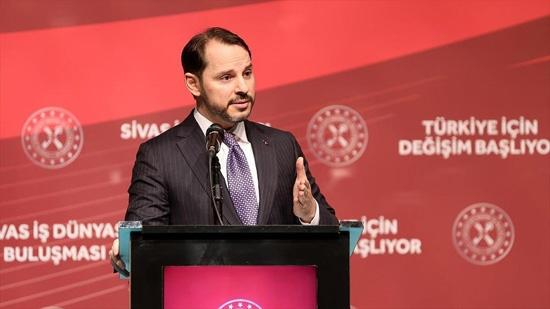 Treasury and Finance Minister Berat Albayrak has predicted that the Turkish economy grew by 5 percent in the fourth quarter of 2019.

“Our performance in 2019 was beyond expectations. The full-year growth will come in at 0.5 percent,” Albayrak said yesterday at a gathering with businesspeople in the Central Anatolian province of Sivas.

The Turkish economy entered 2020 on a stronger footing, the minister said, adding that Turkey needs to have an economic structure and complete a transformation which help its economy weather fluctuations in the global economy.

In the third quarter of 2019, Turkey’s gross domestic product (GDP) increased by 0.9 percent on an annual basis, after contracting 1.6 percent and 2.3 percent in the second and first quarters of 2019.

The government targets 5 percent economic growth each year between 2020 and 2022, according to the new economic program released in September last year.

On a related note, the World Bank has kept its GDP growth forecasts for the Turkish economy for this year and next unchanged in the latest edition of its Global Economic Prospects unveiled on Jan. 8.

According to the World Bank, the Turkish economy will grow by 3 percent in 2020 while the country’s GDP growth rate will pick up to 4 percent in 2021. The bank’s growth forecast for 2022 is also 4 percent.

“Industrial production and manufacturing data suggest that the economy began to stabilize in late 2019, following the disruptions from acute financial market pressures in the previous year,” the bank said in the report.

Growth is projected to recover to 3 percent in 2020, as investment and imports recover from a deep contraction in 2019, it added.

“Gradual improvement in domestic demand is expected to support growth over the forecast horizon. This outlook assumes that fiscal and monetary policy remain steady.”

At the meeting with businesspeople in Sivas, Albayrak said that inflation will decline and stabilize at single digits in 2020.

The annual inflation was 11.84 percent last year. In December alone, consumer prices increased by 0.74 percent on a monthly basis, the latest official data from the statistics institute (TÜİK) showed.

The government targets 8.5 percent inflation this year. Its predictions suggest that the annual inflation rate will ease to 6 percent next year and further down to 4.9 percent in 2022.

The minister also said interest rates, too, will come down to single digits this year.

Farmers who are having problems repaying their debt to state-owned Ziraat Bankası will be allowed repay debt in five years with an annual interest rate of 9 percent, Albayrak announced.