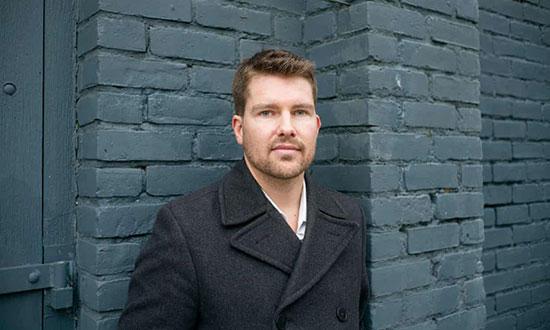 Exclusive: Darryn Frost tells of fighting terrorist with narwhal tusk and of dangers of US policy

Darryn Frost: ‘The next generation of terrorists will rise as a direct result of these actions and we must condemn them now.’ Photograph: Graeme Robertson/The Guardian

The man who used a narwhal tusk to tackle the London Bridge terrorist Usman Khan has accused Donald Trump of “feeding terror” with his belligerent Middle East policy, warning it will breed more murderous attackers like the one he and others faced.

In his first interview since Khan killed two people and injured several more at a criminal justice conference on 29 November, Darryn Frost said the US president’s decision to assassinate General Qassem Suleimani would cost lives and added: “The next generation of terrorists will rise as a direct result of these actions and we must condemn them now.”

Speaking in detail about his ordeal for the first time, Frost, 38, a civil servant working for HM Prisons and Probation, revealed how he tackled Khan alongside two convicted men, using an ornamental tusk to stab Khan through the abdomen, and pinned him to the ground, despite believing that he was wearing an explosive device. He described how in the weeks following the atrocity he had been racked with survivor’s guilt.

Frost has launched a campaign, Extinguish Hate, to convene support for kindness as an antidote to extremism. The former prisons minister and London mayoral candidate Rory Stewart has backed it. Frost said he did not dispute the right of the United States to consider Suleimani a bad actor, but the decision to kill him outside a state of war was wrong and would cause a backlash. His warning came as the Metropolitan police commissioner, Cressida Dick, said this week that her force was “extremely alert” to potential repercussions within the UK from the Iran crisis, while an Iranian foreign ministry spokesman said Iran could consider the UK “a partner in this crime”.

Khan was jailed in 2012 for al-Qaida-inspired terrorism offences and released in 2018. He was a delegate at the conference at Fishmongers’ Hall celebrating five years of a programme bringing students and prisoners together to study criminal justice. At about 2pm he launched his attack, killing Jack Merritt and Saskia Jones, both Cambridge graduates.

“Their deaths have created a drive within me to challenge hatred and intolerance,” he said. “What feeds terror is actions like this where people in power act as judge, jury and executioner across borders and jurisdictions. Who is Trump that he can have this sort of impact across all our lives? Khan may have come from this country so people may not understand why he was extreme. The people who influenced him are likely to be the people who have lost loved ones because of our actions abroad.”

Frost described how he was at the conference in the ornate livery company building on behalf of the Ministry of Justice when he heard shouts downstairs.

“Someone said it could be teenagers, but an ex-prisoner next to me said it wasn’t,” Frost said. “That was my call to action.”

As he ran down the stairs he saw someone below lying motionless in pooling blood. Khan had already landed fatal blows on Merritt and Jones. Fearing there would be nothing downstairs that might be improvised as a weapon he turned back and found a pair of ornamental narwhal tusks on the first floor, and slid one carefully from its wall bracket so as not to break its sharp tip.

He returned to see Khan wielding two large knives above his head and confronting Steve Gallant, a convicted murderer and fellow delegate.

“He was slashing at Steve, but Steve had a chair. I pointed the tusk at Khan’s belly and the balance of power shifted in our favour. Khan turned and said to me: ‘I am not here for you. I am here for the police. I am waiting for the police.’”

Frost said Khan then added: “I’ve got a bomb.”

As Frost considered the risk to the delegates upstairs of an explosion, Gallant threw a chair at Khan which only clipped his shoulder. Khan was back in charge so Frost passed the unarmed Gallant his tusk and ran back upstairs to collect the other one, passing people tending to Jones.

“People don’t see the bravery of those individuals who put themselves in harm’s way,” he said.

There was another person lying beyond Khan in a pool of blood whom no one could reach.

Upstairs again, a Ministry of Justice colleague urged Frost to stay away, but he said: “I’m not having any of this,” and pushed the colleague to the wall.

He scrambled downstairs with the second tusk to see the first tusk shattered. Gallant, again unarmed, was pursuing Khan, knives raised, out into the street where he seemed to be “going for the public, going for maximum damage”.

Also outside was John Crilly, another convicted killer and delegate who was blasting a fire extinguisher at Khan.

“Steve and John were shouting out to the public, ‘Get away, he’s killed people,’” and people fled “like a shoal of fish swimming from a shark”.

“He came at me and, instinctively, I stabbed him in the lower abdomen. I felt it go in and he didn’t react, but when I pulled it out he slumped for a half second … Steve, totally unarmed, grabbed Khan by his left shoulder and pulled him off balance.”

Khan landed face down on his knees. As the others piled on, Frost lay on Khan’s back, grabbed his wrists, and implored the others to “take the knives”. Even though he was lying on top of a terrorist who had told him he had a bomb, he never feared he would die, he said. He was worried when the police arrived that that would be Khan’s trigger.

Fleetingly, he was able to see the device strapped to Khan. “I thought it was amateur or a hoax. I could see cardboard and little pieces of duct tape. It looked hollow.”

But he also saw a mobile phone tucked into it, making him worry he could have an accomplice who could detonate the device remotely, if it was real.

The police finally yanked Frost off Khan and fired shots into the attacker’s chest and abdomen, killing him instantly.

“I thought it was fireworks, his pathetic attempt at an explosive device. I hung my head thinking, ‘It’s amateur, it’s fake.’ I was really upset at this loss of life. People will see me as a terrorist sympathiser and I am not. I sympathise with the loss of life and where it could have been prevented.”

However, Frost is sure the police had no reason to believe the bomb was not real. He had not told anyone of his suspicion it was amateur or fake.

They went back into the hall and Frost looked down from the window and saw Khan dead, lying on his back on the bridge pavement, the fake bomb visible around his midriff and one of his knives a few yards from him. He picked up a section of the shattered tusk, which he carried with him to the triage centre. Life since has been difficult.

“The first two weeks were horrendous. It was like a movie going through my brain at 100mph. I’ve had lots of memory loss. I am feeling really depressed and low. I have been suffering from survivor’s guilt. Why should I have any joy when Jack and Saskia can’t any more?

“But I am proud of the actions I, John, Steve, Lukas [a Polish kitchen porter who was injured] and others took. That has helped me.”