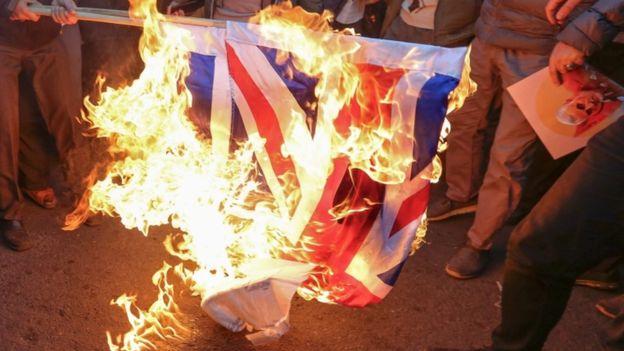 BBC.COM-Iran’s leaders are facing a second day of protests following their admission the military shot down a Ukrainian passenger plane, killing all 176 people on board, many of them Iranians.

Demonstrators gathered at universities in Tehran and at sites in other cities, calling for senior officials to go.

Riot police have been sent to Tehran’s Azadi Square and other landmarks.

Iran admitted “unintentionally” hitting the plane after initially denying it amid rising tensions with the US.

The plane, en route to the Ukrainian capital, Kyiv, was shot down near Tehran last Wednesday, shortly after Iran had launched missiles at two airbases housing US forces in Iraq.

Those strikes were a response to the US killing of senior Iranian commander Qasem Soleimani in a drone strike in Baghdad on 3 January.

Dozens of Iranians and Canadians, as well as nationals from Ukraine, the UK, Afghanistan and Sweden died on the plane.

What has happened at Sunday’s protests?

Riot police, members of the elite Revolutionary Guard on motorbikes, and plainclothes security officials were out in force.

In one apparently symbolic act rejecting state propaganda, video showed students taking care not to walk over US and Israeli flags painted on the ground at Shahid Beheshti university in Tehran.

In some social media clips, protesters can be heard chanting anti-government slogans, including: “They are lying that our enemy is America, our enemy is right here.”

Scores of protesters were also reported at sites in other cities.

Those who decide to continue demonstrating will be mindful of the violence with which the security forces have dealt with protest movements in the past, the BBC’s Arab affairs editor Sebastian Usher says.

On Saturday, students had gathered outside two universities. They initially did so to pay respect to the victims, but angry protests erupted later in the evening and tear gas was reportedly fired to disperse them.

A number of Iranian newspapers have covered the vigils for the plane victims alongside headlines such as “Shame” and “Unforgivable”.

But there has also been praise for what one pro-government newspaper called Iran’s “honest” admission of error.

There were also protests on Sunday in Tehran in support of Soleimani, and opposing the US and UK.

What has the international reaction been?

US President Donald Trump on Sunday repeated warnings that Iran should not target anti-government protesters, saying, “the World is watching. More importantly, the USA is watching”.

Britain, meanwhile, has condemned the arrest of the UK ambassador to Iran in Tehran as a “flagrant violation of international law”.

Foreign Secretary Dominic Raab said Rob Macaire was detained after attending a vigil where he was paying respects to victims of the crash, some of whom were British.

Mr Macaire said he left the vigil when some people started chanting and had played no part in the demonstration.

Iran on Sunday summoned the ambassador to complain about “his unconventional behaviour of attending an illegal rally”, the foreign ministry website said.

Iranian protesters set a UK flag alight in front of the UK embassy on Sunday.

In other developments on Sunday:

The Iranian people will probably demand accountability and the prosecution of those responsible for downing the plane, as well as the adoption of all the steps needed to ensure this does not happen again.

They will also pay attention to how the victims of the air crash are treated by the Iranian elite. An important test here is whether their funerals will result in national mourning, similar to that of Soleimani, or instead be largely ignored.

All of these demands will be added to previous grievances over the state of the economy and the limitations on some social freedoms.

Parliamentary elections are due to take place in just over a month and internal discord over this crash could lead to further unrest.

How did the Iranian admission unfold?

For three days, Iran denied reports its missiles had brought down the plane, with one spokesman accusing Western nations of “lying and engaging in psychological warfare”.

But on Saturday morning, a statement read on state TV accepted the plane had been shot down.

He also said he had informed the authorities about what had happened on Wednesday, raising questions about why Iran had denied involvement for so long.

Both Ukrainian President Volodomyr Zelensky and Justin Trudeau have demanded accountability from Iran.

Mr Trudeau said on Saturday there must be a full investigation with “full clarity on how such a horrific tragedy could have occurred”.