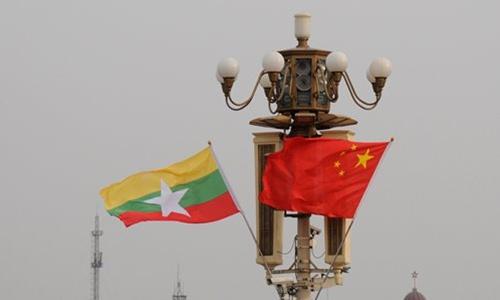 When China or the Belt and Road Initiative (BRI) it proposed is mentioned together with the names of China’s neighboring countries in Western media reports, there are always words concerning China’s rise and those countries’ destinies.

In this context, Myanmar is no exception. But such reports often ignore the fact that China-Myanmar ties have become an example of coexistence between a large and a smaller country where joint development and win-win cooperation are the keynote of China’s foreign policy. The policy’s vitality and influence are often overlooked by the West.

China-Myanmar ties are typical: There are frictions between the two countries, but the main line of their relationship has not been affected. For instance, the Myitsone Dam project that was suspended in 2011 still remains unsettled without a result acceptable to both sides. But the two countries’ cooperation on electric power didn’t stop. Actually, the two countries have cooperated in this sector for more than 20 years.

As of December 2018, the Yeywa hydropower station, the largest plant in Myanmar, which was constructed in cooperation with China and commissioned in December 2010, had supplied more than 25 percent of electricity for public and private consumption in Myanmar.

Take Shwebo, a city in Sagaing Region of Myanmar, as another example. Two years ago, residents in the city didn’t have full access to electric power. But now, with the help of Chinese enterprises, the city is all lit up in the night.

Myanmar is a friendly neighbor of China. It has actively cooperated with China under the framework of the BRI. China-Myanmar “Paukphaw,” or fraternal, friendship gains vitality with the passage of time and enjoys lasting charms.

Myanmar wants to have China’s support in its own development, while China is willing to share the dividend of development with Myanmar and encourages Chinese companies to expand markets overseas.

Unlike some Western countries, which hold tight onto obsolete geopolitical ideas and set standards on many issues while adopting double standards, China respects Myanmar in developing and bettering people’s livelihood in accordance to its real demand. China’s respect comes also in sectors beyond the economy and Myanmar is aware of that.

The Rohingya issue has reflected the double standards of the West, showing that some Western countries only want to have their so-called justice served rather than the conundrum properly resolved in Myanmar.

Whenever a country makes good relations with China, some Western countries that label China a competitor will put on their tinted spectacles with geopolitical prejudices. It has been proved that the West’s pre-set standards on economic development and other issues will only hinder or even undermine Myanmar’s development.

The 21st century is the Asia century. Adhering to outdated geopolitics, the West is no longer qualified to be a teacher in development for Asian countries.

All mankind will ultimately live in a community of a shared future. Dividing the world into different camps and creating confrontations, which the West is good at, is doomed to be marginalized amid growing globalization.