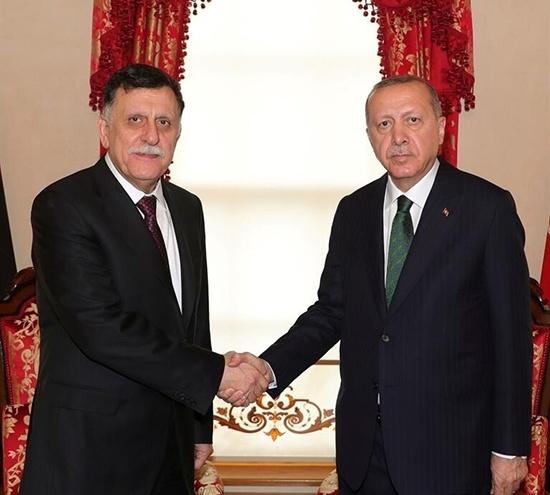 The closed-door meeting between Erdoğan and Fayez al-Sarraj is underway at the Dolmabahçe Palace.

The U.N.-backed Government of National Accord (GNA) in Tripoli and forces loyal to Libya’s renegade Gen. Khalifa Haftar accepted a joint call by Turkey and Russia for a cease-fire on Jan. 11.

Turkey’s Defense Ministry issued a statement on Jan. 12 saying the situation in Libya was “calm except for one or two isolated incidents.”

The truce could be the first break in fighting in months, and the first brokered by international players. It comes as Libya is on the brink of a major escalation.

It also comes amid a broader diplomatic push for a political solution to Libya’s war, which has crippled the country for more than seven years.

The war has displaced hundreds of thousands and left more than a million in need of humanitarian aid, according to the U.N.

The U.N. and European powers, along with Libya’s allies in the region, have been calling for a peace summit to happen in Berlin early this year that would bring together the leaders of the rival governments, and possibly move the country closer to nationwide elections.

Libya is governed by dueling authorities, one based in the east and one in Tripoli in the west. Each rely on different militias for support. Both sides have different stipulations in order for the fighting to stop.

Fayez al-Sarraj, prime minister of the GNA in Tripoli, has previously demanded that Haftar’s forces retreat from the capital’s outskirts and halt their offensive against it.

Haftar and his allies, meanwhile, have called for the dissolution of militias fighting for Sarraj inside Tripoli. The conditions of neither are likely to be met.

The Associated Press reported that Haftar’s forces ruled out any retreat from areas recently captured by their troops.

Haftar’s east-based forces launched a fresh offensive to take the capital of Tripoli in April. The fighting sparked international efforts to try to contain the crisis in the North African nation.

In the last month, Haftar’s forces have made significant advances. Earlier this week, they captured the strategic coastal city of Sirte, the hometown of Libya’s longtime dictator Muammar Gaddafi.

Earlier this week, Erdoğan and Putin released a joint statement after a meeting in Istanbul calling for a Jan. 12 truce. They did not specify what the conditions would be.

A U.N. peacekeeping mission welcomed the prospect of an end to the fighting. The United Nations Support Mission in Libya said in a statement that it hoped all parties would demonstrate “complete adherence” to its terms and stop the violence.

The east-based government, backed by Haftar’s forces, is supported by the United Arab Emirates and Egypt, as well as France and Russia. The western, Tripoli-based government receives aid from Turkey, Qatar and Italy.

The fighting has threatened to plunge Libya into violent chaos rivaling the 2011 conflict that ousted and killed Gaddafi.