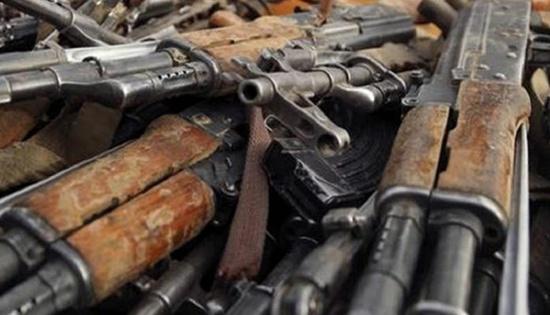 Tunisian authorities have seized Turkish-made weapons smuggled from Turkey to Libya that were bound for Feriana, Kasserine, a region in Tunisia infiltrated by terrorist groups affiliated with the Islamic State in Iraq and the Levant (ISIL) and al-Qaeda in the Islamic Maghreb (AQIM), Interior Ministry spokesperson Khaled Hayouni announced on Wednesday.

According to the Asharq al-Awsat news website, the security units seized the weapons from a vehicle in Beni Khedache, Medenine Governorate, in an ambush.

Hayouni stressed that the weapons seized were not buried in the dirt as some media outlets suggested. He also announced that five people were arrested in connection with the seized arms, the Tunis Afrique Presse (TAP) said.

Caretaker Prime Minister Youssef Chahed visited the Directorate of the Investigating Police at El-Gorjani announcing that the seized weapons were meant to be used for terrorist attacks on sensitive sites in Tunisia.

Earlier, Interior Minister Hichem Fourati said all measures have been taken in anticipation of any development on the Tunisian-Libyan border, stressing the deployment of security units and the army along the coast and on the country’s eastern border.

The Tunisian government has rejected Turkey’s request to use its territory in the fight against the forces of Gen. Khalifa Haftar in Libya.

In a statement presidential spokeswoman Rachida Nayfer said: “Tunisia categorically rejects any foreign interference in Libya, including the Turkish intervention, which was Tunisia’s position from the first, and has not and will not change.”