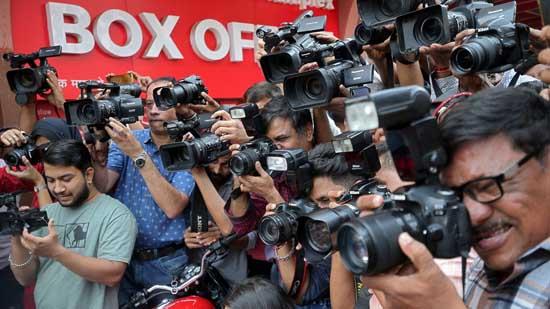 A seemingly innocuous box office battle between the films of two superstars, Deepika Padukone and Ajay Devgn, has spilled over into a political domain beyond Bollywood, triggering a war of words over PM Modi’s policies.

Indian film actor, director and producer Ajay Devgn’s ‘Tanhaji: The Unsung Warrior’ and Indian superstar actress and producer Deepika Padukone’s ‘Splash’ are very different movies in ways that extend far beyond storyline or budget. They appear to have divided audiences along ideological lines ever since they hit cinemas together on January 10.

The intense rivalry over the two films can be gauged by the fact that workers for the ruling Bharatiya Janata Party are distributing free tickets for ‘Tanhaji’ – based on the legend of a Hindu warrior from the medieval era – in many places, while Congressmen, members of the main opposition party in India, are doing so for ‘Splash’, a biopic about acid attack survivor Laxmi Agarwal.

Several BJP leaders have called for a boycott of ‘Splash’, but in the Congress-ruled states of Madhya Pradesh, Chhattisgarh and Rajasthan, the movie has been declared tax-free in a bid to boost its prospects.

On the big screen

Box-office figures for the two movies have only served to further intensify their fight. ‘Tanhaji’ has been met with a tremendous response, bringing in Rs 61.75 crore (US$8.7 million) at ticket windows over its opening weekend; in contrast, takings for ‘Splash’ were much lower, totaling Rs 19.02 crore ($US2.6 million) in the same period.

It may not be a battle of equals. ‘Tanhaji’ is an extravagant period drama depicting the exploits of Tanaji Malusare, a 17th-century Maratha military leader from Maharashtra who took on the mighty Mughals during the reign of Muslim emperor Aurangzeb. ‘Splash’, on the other hand, is a low-budget film tackling the rampant issue of acid attacks on girls across India, which seeks to deliver a strong social message.

Despite their vast differences the two movies are locked in an epic clash – primarily because of Padukone’s visit to Jawaharlal Nehru University two days before the release of her movie, apparently to express solidarity with agitating students who had earlier been beaten by the police.

The university campus has long been a hotbed of left-wing politics, with students having protested for quite some time against the policies of the Modi government, including the recent amendment to the citizenship laws and the hikes in various university fees.

Padukone’s visit, therefore, raised the hackles of Modi supporters, who not only accused the 34-year-old actress of resorting to a cheap publicity stunt to boost her film’s prospects, but also called for its boycott due to her support for the allegedly divisive elements on the JNU campus.

Unsurprisingly, the actress was on the receiving end of their barbs once it became clear on Monday that her film had fared poorly compared to ‘Tanhaji’.

Padukone’s baiters claim that audiences have summarily rejected her film while extending wholehearted support to ‘Tanhaji’ because the Devgn-starrer, containing themes of nationalism, reflects the overall national mood against divisive forces in the country. They also construe its success as a validation of the Modi government’s policies, underpinned by a sense of national pride and patriotism.

“It is no longer #Tanhaji vs #Chhapaak (‘Splash’ – RT.) at the BO, it’s about those For India vs Against India. I hope the message is loud and clear,” tweeted Gunjan Mehta, apparently a supporter of the government. Others dubbed ‘Splash’ a commercial disaster, claiming only three people had gone to watch it in a theatre in the eastern city of Patna on the day of release.

Film analysts believe that the success of ‘Tanhaji’, which is set to be the first movie of the year to net Rs 100 crore ($US14 million) – a benchmark for any blockbuster in India – points to a growing preference among audiences for nationalistic films. They cite the massive success of 2018’s ‘Uri’, starring Vicky Kaushal, which was based on India’s surgical strikes on the terror camps of Balakot in Pakistan-occupied Kashmir in 2016.

‘Tanhaji’ director Om Raut also feels that the general atmosphere in the country today is one of pride and patriotism.

”The environment is of a very strong feeling of being an Indian, of patriotism,” he says. “The entire environment is such. Cinema and filmmakers are only a reflection and part of society.”

Nonetheless, ‘Splash’ has not turned out to be a damp squib after all. Trade experts say that, although it may have done less business than ‘Tanhaji’, it is a smaller movie by comparison.

‘Splash’ has been made on a tight budget, they note, with both Padukone and director Meghna Gulzar also adopting the role of co-producers. Since it does not contain any big stars other than Padukone herself, it is likely not only to recover its costs, but also to make a profit towards the end of its first week in cinemas.

It is altogether a different matter that ‘Tanhaji’, a veritable ode to Hindu valor and pride, will have become a blockbuster by then – and that will be a cause for celebration for Modi supporters in and outside of the Indian film industry.