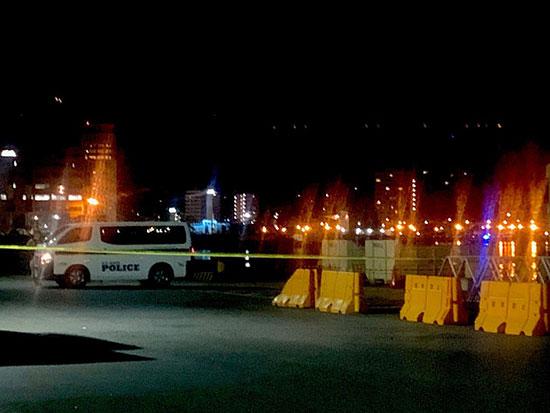 By CAITLIN DOORNBOS – STARS AND STRIPES

YOKOSUKA NAVAL BASE, Japan – Contractors diving near the base docks on Monday found an unexploded artillery shell during a site survey, base spokesman Randall Baucom said.

Yokosuka security responded to the area near Berth 5 to secure a perimeter around the area where the 5-inch munition rested about 22 yards from the shore, Baucom said.

It is unclear whether the shell — believed to be a naval artillery round — is American or Japanese or how old it is because of corrosion, he said. The dredging company divers found the shell beneath about 43 feet of water.

An explosive ordnance disposal team on Tuesday will use small explosives to destroy the munition where it lies “so it is no longer a danger to any future dredging operations,” Baucom said.

“There is no threat to personnel and watercraft operating in the area,” he said.

Base officials coordinated with the city of Yokosuka, Yokosuka District of the Japan Maritime Self-Defense Force and the South Kanto Defense Bureau during the response, he said.

It is not uncommon for unexploded ordnance and other decades-old weaponry to be discovered on the base, which once belonged to the Japanese Imperial Navy before it was seized by Allied forces at the end of World War II.

In 2018, workers discovered 25mm anti-aircraft shells at the construction site of a new child-development center.

Leftover ordnance is regularly found across Japan. In 2016, a 5-inch unexploded shell from an American warship was discovered at a construction site near Camp Kinser, Okinawa, and a contractor found 12 Japanese mines in an ordnance area at Sasebo Naval Base.