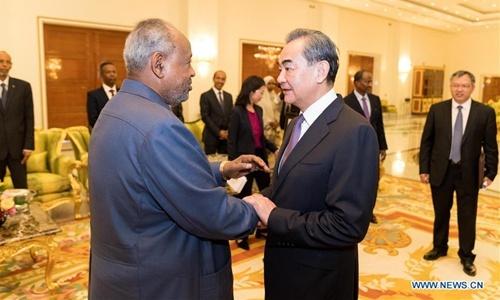 “Africa first” embodies 30 years of diplomatic tradition for the Chinese foreign minister to start the new year with a tour of the continent.

This year Egypt, Djibouti, Eritrea, Burundi and Zimbabwe are on the agenda as they have attracted attention due to dynamic changes in those regions and because the US, Russia, France and Japan have restructured their Africa policies in recent years.

Little Djibouti would be a microcosm to understand many issues through my experience there. It is a country that receives China’s development aid, loans and investment, a nation connecting with the Belt and Road Initiative, and strategically located in the Horn of Africa. It holds China’s first overseas logistics support base.

Indeed, peace and security are an important pillar of the China-Africa story. Egypt, Eritrea and Djibouti on Foreign Minister Wang Yi’s agenda are intricately linked to the geopolitical shifts in the Horn of Africa and the Red Sea. And now, Djibouti is under the spotlight among major powers. But there is no need to exaggerate China’s first logistics support base in Djibouti since the US, France and Japan have a larger number of military personnel, equipment and bases.

For years, Chinese PLA Navy has been an important partner of other countries and international organizations in fighting piracy and escorting merchant ships in the Gulf of Aden under the UN flag. Djibouti has become a platform for cooperation on regional peace and security among international partners. Many joint exercises in terms of disaster relief and humanitarian assistance as well as exchanges and cooperation have been held between China, Djibouti and European countries at Chinese logistics support base and the Gulf of Aden.

As 2020 has arrived, is China a competitor in Africa?

From the economic perspective, Chinese companies and financial institutions have brought more competitiveness to the African market under business terms in recent years. But it also brings more options for African nations including Djibouti, a UN designated least developed country.

All such investment will boost Djibouti’s vision to be a regional trade and distribution hub. And companies invested into by France, the United Arab Emirates and others are benefiting from those programs.

Actually, China’s support for Djibouti’s development reflects a common principle in China-Africa development – sincerity, practical results, affinity and good faith. China never interferes in African countries’ internal affairs and never imposes its will on them and attaches no political strings when providing aid to Africa. It means that China knows African nations are tired of their former colonizers’ finger-pointing and treasure their sovereignty.

However, it seems China’s cooperation with African countries is facing threats as the US makes Chinese and Russian presence in Africa as the leitmotif of its Africa policy. But African countries are aware of Washington’s rival mind-set and are not willing to take sides.

Tracing history, African countries know that they have suffered too much from the power games between the US and the former Soviet Union during the Cold War. The Horn of Africa and the Red Sea were once under the spotlight. Some countries like DR Congo and Somalia are struggling to recover from that bitter history in recent years. As for today, it is even risky for some African countries to be drawn into the games among emerging powers from the neighboring Middle East.

Djibouti is a tiny country in the Horn of Africa, but vast enough to hold bases of the US, France, European countries, Japan and China. So does the African continent. Sincere and practical cooperation is highly appreciated in Djibouti, but confrontation doesn’t fit here.