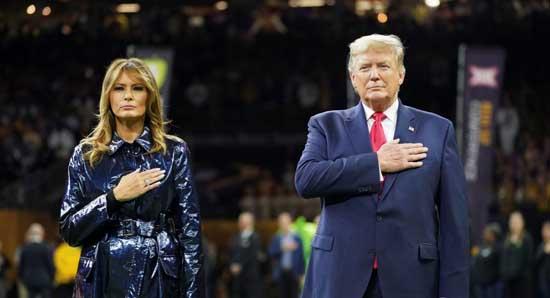 US President Donald Trump and first lady Melania Trump took the field at the start of the College Football Playoff National Championship in New Orleans at the game between Louisiana State University and Clemson.

Donald Trump and his wife were greeted by roaring crowds, who cheered as they traversed the field at the 2020 National Championship Game in New Orleans, smiling and waving.

​“Your quarterback is fantastic, and some other players are fantastic,” Donald Trump said about LSU quarterback Joe Burrow in a interview. “He seems to be a real standout. He’ll be, I think he’s gonna be tremendous in the NFL.”

​Ealier, Trump was met by a similarly boisterous round of applause at the Army-Navy football game; however, he did receive some boos during the 2018 national championship game.

Pashinyan: Armenia to turn to CSTO or directly to Russia if hostilities expand to its entire border