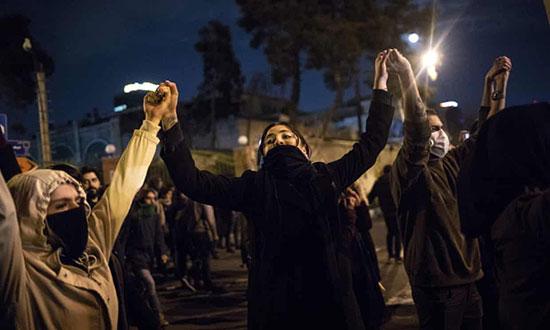 Demonstrations have broken out in Iran over the downing of a Ukrainian passenger jet which killed all 176 people onboard. Photograph: STR/AFP via Getty Images

At least two presenters working for the Iranian state broadcaster IRIB have announced they have quit their jobs, with a third saying she quit some time ago after having told lies on behalf of the state for 13 years.

Gelare Jabbari apologised in an Instagram post, writing: “It was very hard for me to believe that our people have been killed. Forgive me that I got to know this late. And forgive me for the 13 years I told you lies.”

Zahra Khatami quit her role at IRIB, saying: “Thank you for accepting me as anchor until today. I will never get back to TV. Forgive me.”

Her fellow anchor Saba Rad said: “Thank you for your support in all years of my career. I announce that after 21 years working in radio and tv, I cannot continue my work in the media. I cannot.”

The journalists’ statements are part of a crisis of confidence following the initial attempts by state officials to deny that Ukrainian jetliner 752 had been shot down by mistake by members of the Islamic Revolutionary Guards Corp (IRGC) air defence force.

The crisis is leading even some of the news agencies most closely associated with the regime to start reporting on the street protests, or a least to start addressing the allegations about a potential state cover-up.

The Tehran-based Association of Iranian Journalists said in a statement that the country was witnessing “a funeral for public trust” that was damaging the already shaky reputation of Iran’s official media.

Speaking candidly on BBC Radio Today, Ghanbar Naderi, a commentator on Iran’s state-run Press TV, admitted: “There is little trust in the government and people want more freedom. The lies they said about the shooting down of the aeroplane [have] lost public trust. The Islamic Revolutionary Guards Corps know it very well.”

He added: “Millions and millions took [to] the streets following the assassination of Qassem Suleimani. It was a rare moment of unity but the IRGC blew it. As a journalist you need to be able to sleep at night. I will never ever distance myself from the truth. This a great nation. It has made many mistakes that are unacceptable. If the IRGC shot down a civilian airplane, I have no choice but to condemn it.”

The Association of Iranian Journalists said: “The publication of false information has had a severe impact on public confidence and public opinion, and more than ever shook the media’s shaky position. The situation has become so complex. We lie loudest when we lie to ourselves; and Islamic Republic of Iran state television employees acknowledge that their credibility has been lost. Unaware that the credibility of this media and most of the domestic media had long since vanished.

“It should be noted, however, that other media outlets objected to the situation, but the Islamic Republic of Iran’s state television favoured it. This incident showed that people cannot trust official data and journalists should try to fill this gap as much as possible.”

Many Iranian newspapers appear to be angry because they felt their readerships were turning to international media to find out the truth about the crash.

For instance, the reformist newspaper Etemad has persistently demanded since the weekend to know for how long the IRGC knew that it had shot down the plane and whether senior figures in the government were really not informed until Friday.

Commentary in the reformist press and on Twitter had been hugely critical of what writers described as “structural lies” by state institutions, as well as lack of coordination between the country’s civilian aviation authority and IRGC. Etemad has called on officials not just to apologise, but to resign.

The head of the Iranian civilian aviation authority, Ali Abedzadeh, has been most subject to criticism. Abedzadeh had told reporters: “The story that the plane was shot down by a rocket cannot be true under any circumstances … It is impossible from the scientific point of view.”

The authority subsequently apologised for “inconsistency in the information provided”, adding: “We have not been under any pressure or advice to conceal the reality and have no intention of concealing the reality … We have released the information we believed … and we are sorry for the mistake.”

Reporters Without Borders ranks Iran as 170th in the world press freedom index out of 180 countries. It says state control of news and information is unrelenting and at least 860 journalists and citizen-journalists have been imprisoned or executed since 1979.

Social influencers on Twitter often find their thoughts banned by either targeted or generalised internet shutdowns.

That said, papers do manage to carry debates about government errors including the timing of November’s petrol price hike, rampant corruption, the Guardian Council disqualification of parliamentary candidates and the spiralling cost of housing.

But the scale of the cover-up by the state, and the current outpouring of shamed regret by senior IRGC commanders, has given some media leeway to attack the catalogue of errors that led to the deaths of some many Iranians. Overseas ambassadors have also felt obliged to apologise over inaccurate information they gave in the wake of the incident.