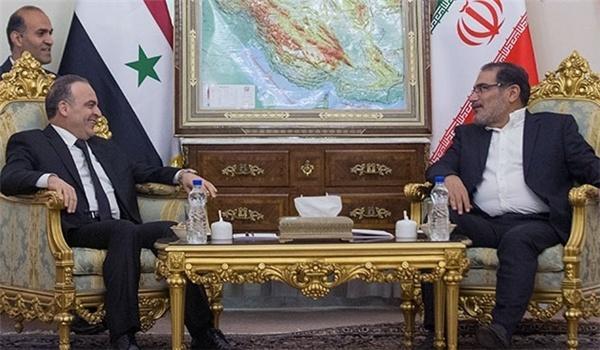 “The Islamic Republic of Iran proved by missile attacks against the US base, Ein al-Assad, and crushing response to the US crime that it will not compromise safeguarding its security and national interests under any conditions,” Shamkhani said in a meeting with Syrian Prime Minister Imad Khamis in Tehran on Monday.

He added that martyrdom of General Soleimani and his comrades in the US terrorist attack further reinvigorated the resistance front and increased the regional and world people’s hatred for the US.

Shamkhani also warned that West Asia will not experience sustainable stability, tranquility and security as long as the US terrorist forces are deployed in the region.

Elsewhere, he underscored Iran’ support for the Syrian government’s measures to end the terrorist groups’ presence in Idlib.

Khamis, for his part, lauded Iran’s support for the Syrian people in the fight against the terrorist groups, stressing the need for the further development of mutual economic and trade cooperation.

General Soleimani was martyred in a targeted assassination attack by the US drones at Baghdad International Airport early on January 3.

The attack came amid tensions that started by the US attack on PMF units that killed 28 Iraqi popular forces. A day later, Iraqi people attacked the US embassy in Baghdad.

The targeted assassination attack represents a dramatic escalation by the US toward Iran after months of tensions. The tensions take root in Trump’s decision in May 2018 to withdraw the US from Iran’s nuclear deal with world powers, struck under his predecessor.

Last Wednesday, the IRGC Aerospace Force launched heavy ballistic missile attacks on US Ein Al-Assad airbase in Southwestern Iraq near the border with Syria and a US operated airbase in Erbil in retaliation for the assassination of General Soleimani.