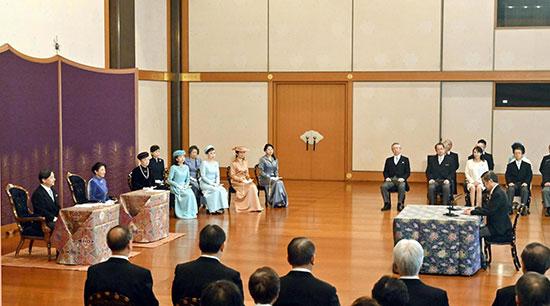 Emperor Naruhito and Empress Masako have accepted an invitation from Queen Elizabeth to make a state visit to Britain in early 2020, in what will be their first overseas visit since Naruhito acceded to the throne in May last year.

“Their Majesties the Emperor and Empress will stay at Windsor Castle,” said a statement from Buckingham Palace. The visit is planned for spring, the statement said.

It will be a rare overseas trip by Masako, who did not go on many visits with Naruhito while crown princess due to her recovery from a stress-induced illness.

“The relationship between our country’s imperial family and Britain’s royal family has played an important role in fostering strong ties between both of our countries,” Japan’s Chief Cabinet Secretary Yoshihide Suga told reporters.

“In line with this spirit, the emperor and the empress have received an invitation to visit,” he said, adding that plans were under way for the imperial couple to visit during the April-June period.

Britain’s exit from the European Union, due to take place on Jan 31, has concerned some Japanese investors and major companies that were encouraged by former Prime Minister Margaret Thatcher to use the country as a launchpad into Europe.

During those visits there were protests by former British prisoners of war who wanted a full apology and further compensation for World War Two suffering.

The queen and her husband, Prince Philip, have made one state visit to Japan: in 1975 at the invitation of Emperor Showa.

Both Naruhito and Masako studied at Oxford, a period which Naruhito has described as one of the happiest times of his life. He conducted research on the history of river transport and she studied international relations.