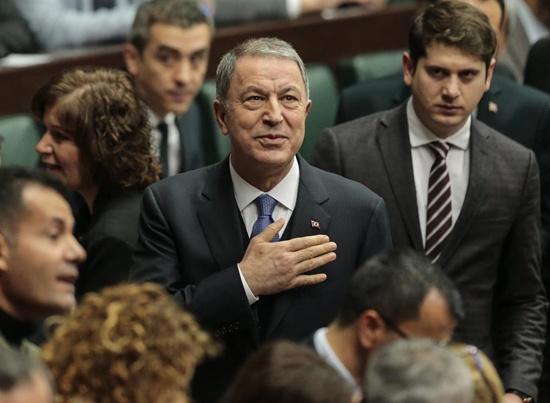 General Khalifa Haftar is deliberately delaying the ceasefire in Libya in order to undermine the dominance of Turkey and Russia ahead of Berlin peace conference this weekend, Turkey’s defense minister has said, expressing his hope for a political breakthrough between the two warring sides through inter-Libyan dialogue.

“Some powers have disliked the Turkish-Russian dominance in pushing for peace. They have given some advises to Haftar. As seen, he did not fully burn the bridges, but he put a hold on the ceasefire,” Defense Minister Hulusi Akar told the Ankara bureau chiefs of media outlets on Jan. 15 in Ankara.

Recalling that Germany will hold an international conference to push Haftar and the U.N.-backed Government of National Accord (GNA) under the leadership of Prime Minister Mustafa Fayez al-Sarraj, Akar has foreseen that the purpose of Haftar in postponing his approval of a permanent ceasefire agreement is to reduce the Ankara-Moscow influence before the Berlin conference.

“We hope they [Haftar and al-Sarraj] will come together in Berlin. We are in favor of ceasefire and peace. We do not want the continuation of clashes. Efforts should be focused on ceasefire so that the Libyan parties can engage in talks for a political solution,” he stated.

Akar has denied reports that Haftar forces have canceled the implementation of a ceasefire in Libya, stressing “It’s too early to suggest that the ceasefire has fully collapsed.”

Turkey and Russia had called on the two sides to begin a ceasefire starting from Jan. 12 and both sides had accepted it. But Haftar refrained from signing an agreement to make the ceasefire a permanent one at a meeting in Moscow on Jan.13.

“We are currently waiting for the conclusion of the efforts of the Russian side,” Akar said, referring to Moscow’s influence on Haftar forces. “Our respondent is Russia,” he added.

‘Worst scenario is continuation of conflict’

The worst scenario in regards to Libya is the failure of peace talks and the continuation of the armed conflict, Akar said. “The ones in Tripoli consider themselves as the real owners of the country and will never abandon the struggle for the good sake of their people. In such a case, we will continue our support to them.”

When asked whether Turkey sees a risk in being pit against the forces supported by Egypt, United Arab Emirates, etc., Akar said, “We surely don’t war to pit against any power in Libya. I think they also don’t want to come face to face with Turkey.”

In line with the security deal, Turkey has varying number of troops in Libya with the task of providing training and advises to Tripoli government, the defense minister said, citing the title of this contingent as “Libya Training and Cooperation Team, or LİBET.”

Turkey has historical, cultural and economic bonds with Libya which shares a sea border in the Mediterranean and questioning why Turkey has engaged in the conflict in this country is baseless, Akar suggested.

On questions whether Turkey would supply air defense systems to Libya, Akar said the government in Tripoli is able to take their own decisions and money for arms supply. He informed Turkey was just giving advises on such issues to the al-Sarraj government.

‘No withdrawal from Idlib’

Akar elaborated on the recent developments in the Idlib province of Syria where Turkey and Russia had initiated the establishment of a de-escalation zone to protect civilians from the deadly attacks of the Syrian regime.

As a result of continued attacks by the regime, around half-a-million Syrians reached Turkish borders, Akar informed, adding, “What we want is the cessation of the bloodshed. Those who have left their houses due to the attacks don’t want to return to the regime-controlled areas. We proposed to the Russians to jointly establish safe zones and safe villages so that these people can at least find some shelter under the difficult winter conditions.”

On a question, the defense minister recalled that Turkey has reinforced its 12 observation posts in the Idlib province and withdrawal from them is out of question. “We have enough equipment and fortification. They are non-negotiable for us.”

Akar also reviewed the latest in northeastern Syria where Turkey held a military offensive to clear the YPG from its borders.

“If you ask what is going on in the area of ‘Operation Peace Spring,’ I would simply say ‘normalization.’ Normalization in all senses,” Akar said, explaining that all related institutions were active in the region to make the local people feel safe and comfortable.

Around 150,000 people have returned home in the area Turkey has cleared of the YPG terrorists, Akar said, informing that talks with the U.S. and Russia still continue for the full implementation of the deals brokered on Oct. 17 and Oct. 22 respectively.

On questions with regard to Turkish-American tension over the former’s deployment of S-400 air defense systems from Russia, Akar recalled that Turkey’s efforts for the supply of Patriot systems from the U.S. have not been met in the past and that’s why Turkey had to seek alternatives.

“We followed a very open and principled way. We told that we will buy and deploy them [S-400s]. And as you know, the deployment has taken place. Training and installation processes continue and the full activation will be realized in April, May. This is the point we have now arrived at,” he suggested.

Even U.S. President Donald Trump admits the wrongful position of the U.S. on the S-400s and cancelling the Turkish partnership to the F-35 aircraft project, the minister said. “If you ignore us, if you don’t work with us to find a solution it would be our natural right to seek new options.”