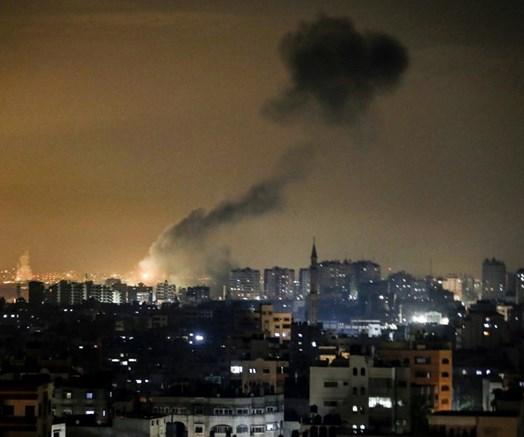 The attacks come just hours after 4 projectiles were fired at communities bordering the Hamas-controlled enclave; in the meantime, a bundle of balloons with a suspicious device attached to it, lands in Sderot

Israeli military on Wednesday launched a series of air strikes in the Gaza Strip in response to rockets fired by the Palestinian militants in the Hamas-controlled enclave hours earlier.

At least four projectiles were fired at Israeli border communities in the afternoon hours, with the Iron Dome missile defense system intercepting two of the rockets, the Israel Defense Forces said in a statement.

The army’s spokesperson said among the sites that were targeted in the strike were a weapons production facility and a military compound belonging to Hamas.

The military added that they’ve deployed additional Iron Dome batteries in cities and communities across southern Israel in anticipation of further rocket launches by “rouge” elements in the Strip.

The sirens sounded in Kibbutz Nahal Oz, Kibbutz Sa’ad and Kfar Aza, which are all within a short distance of the Gaza border, at aroud 3:30 pm. The rocket fire took place as local children were disembarking from buses at the end of the school day.

In addition, the officials in Sderot said a bundle of balloons with suspicious devices attached to it, was located on one of the southern city’s streets in the evening hours.

Police sappers have been called to the scene.

The authorities ask the public to stay vigilant and keep away from the areas where such devices are located.