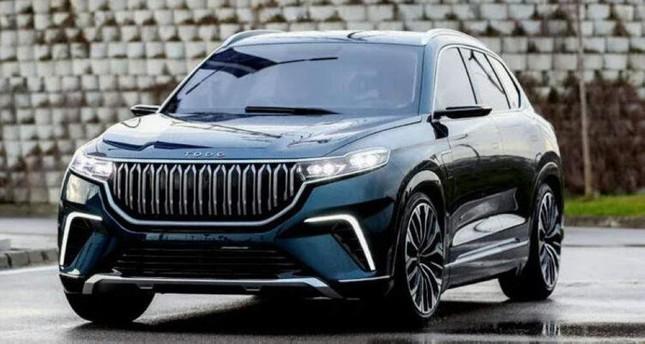 One of the two models of Turkey’s first fully homegrown all-electric car.

Over 1 million electric vehicles are anticipated to be on Turkey’s roads by 2030, Turkey’s Energy and Natural Resources Minister said Thursday.

“By 2022 or 2023, we hope to see our own indigenous automobile on the roads,” Fatih Dönmez told Anadolu Agency’s Editors’ Desk.

Following the country’s launch of its first indigenous and all-electric automobile prototype, the energy ministry is now planning to assess the impact of 1 million charge points on the country’s electricity distribution network, Dönmez said.

On Dec. 27, Turkey introduced its first indigenous automobile prototype that was designed and manufactured in 18 months by Turkey’s Automobile Joint Venture Group (TOGG), a conglomerate of industrial giants including the Anadolu Group, BMC, Kok Group, Turkcell and Zorlu Holding as well as an umbrella organization, the Union of Chambers and Commodity Exchanges of Turkey.

The consortium’s SUV in the C-segment will be the first fully electric SUV in Europe. It will also surpass competitors with the longest wheelbase, largest internal volume and fastest pickup performance.

TOGG is currently working with the ministry to determine the optimum location for the installation of fast-charging points in the country.

“These points should be able to charge a car in nearly 15-25 minutes, depending on the car battery’s capacity and features, which means there needs to be a capacity of 50-100 kilowatt-hours in the grid,” he explained.

Therefore, fast-charging units located in the selected areas need to have sufficient power supply to cope with this electricity requirement.

“TOGG’s expectation from us [energy ministry] is to include not only the big cities in Turkey but also other smaller cities in Anatolia where there is great interest,” the energy minister said.

A previous report by the SHURA Energy Transition Center said Turkey’s potential to increase electric vehicle use in the country is high, parallel to the increasing use of electric vehicles in many other countries due to their various benefits, including contribution to a cleaner urban landscape, electricity load management and better efficiency.

In this context, sales of battery and plug-in hybrid electric vehicles are expected to reach 55% of all vehicle sales in Turkey in 2030, the report projected.

During the interview with AA, Dönmez also elaborated on the issues regarding Turkey’s gas facilitating activities between East and West, including the Russian gas export to Europe via Turkey and the current situation in East Mediterranean, highlighting that Turkey operates with two seismic and two drilling vessels in the area.

Currently, the Fatih and Yavuz drilling vessels along with the Barbaros Hayreddin Paşa and Oruç Reis seismic vessels conduct exploration activities on behalf of the country.

Dönmez noted that the country has inaugurated the Trans Anatolian Natural Gas Pipeline (TANAP), a megaproject that forms the first pipeline to deliver natural gas from Azerbaijan through Turkey and on to Greece, the first step in its European leg Trans Adriatic Pipeline (TAP) in 2019.

Minister Dönmez said that the steps for the storage of natural gas are also proceeding.

“As of last year, the amount of natural gas that can be sent to the system increased to 318 million cubic meters per day,” he said.

The energy minister stressed that petroleum production has broken the record of the last 20 years with production rose to an average of 50,000 barrels per day.

Touching upon the current situation in East Mediterranean regarding the maritime deal between Ankara and Libya’s U.N.-backed Government of National Accord (GNA), Dönmez said the country has further strengthened its position in the region.

Turkey and Libya signed two separate deals in 2019 following a meeting between President Recep Tayyip Erdoğan and the head of the Presidential Council of Libya’s U.N.-backed GNA, Fayez Al Sarraj, in Istanbul. One of the deals was critically important as it enabled Turkey to secure its rights in the Mediterranean while preventing any fait accompli by other regional states.

Emphasizing that there is a registration process in the U.N. regarding the agreement signed with Libya, Dönmez said, “As soon as it is completed, we will license the parcels in this region rapidly.”

Dönmez noted that Ankara is willing to sit for talks with international actors regarding the activities in the Eastern Mediterranean except from the Greek Cypriots.

In a bold disregard of the rights of the Turkish Cypriot community, the Greek Cypriots unilaterally declared a total of 13 so-called parcels in the Eastern Mediterranean as its exclusive economic zone (EEZ) and allowed international oil and drilling companies to operate in these areas.

However, the majority of these parcels clash with the EEZ declared by the Turkish Republic of North Cyprus (TRNC), with the Greek Cypriot administration ignoring the fundamental rights of the TRNC to a share of the island’s resources. The unilaterally declared EEZ of the Greek Cypriot administration violates part of Turkey’s shelf, particularly in Blocks 1, 4, 5, 6 and 7.