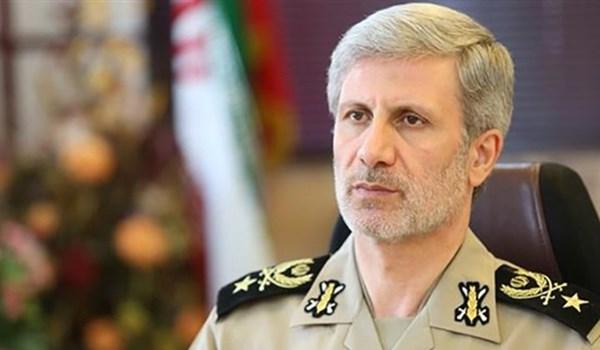 TEHRAN (FNA)- Iranian Defense Minister Brigadier General Amir Hatami underlined that the recent retaliatory missile attacks against the US bases in Iraq were only a warning to Washington not to test Iran’s military power.

“The American commanders who had been used to show to the public their hollow power by heavy fire against other countries, while those countries were in weak conditions, and against the defenseless nations, felt the scorching heat of the Islamic Revolution Guards Corps (IRGC)’s missile power,” General Hatami said, addressing a ceremony in Tehran on Thursday.

“I hope that the enemies never make a decision to test the Iranian nation’s determination because what was carried out, was just a warning and a slap,” he added.

On January 8, the IRGC Aerospace Force started heavy ballistic missile attacks on US Ein Al-Assad airbase in Southwestern Iraq near the border with Syria and a US operated airbase in Erbil in retaliation for the US assassination of IRGC Qods Force Commander Lieutenant General Qassem Soleimani.

The second IRGC reprisal attack targeted a US military base near Erbil airport in Iraqi Kurdistan Region in the second leg of “Martyr Soleimani” reprisal operation.

Iraq said the attacks had not taken any toll from its army men stationed at these two bases. The US army had blocked entrance into Ein Al-Assad to everyone, including the Iraqi army.

It was the first direct attack on the US army ever since world war two.

The IRGC officials said none of the missiles had been intercepted.