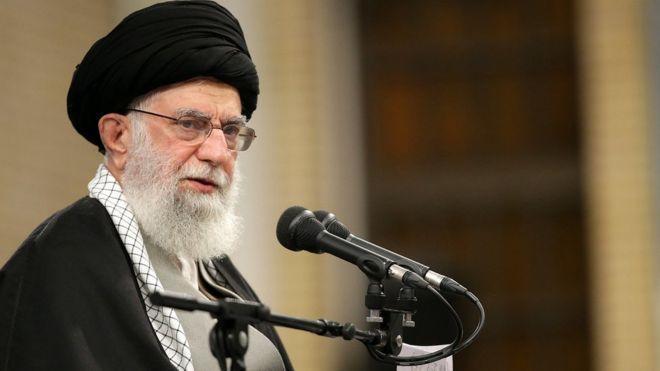 Iran’s Supreme Leader Ayatollah Ali Khamenei is to lead Friday prayers in the capital Tehran – the first time he has done so in eight years.

It comes in the wake of widespread angry protests over the Ukrainian passenger plane shot down by Iran’s military last week.

Iran’s leadership is also under pressure over a sharp downturn in the economy brought on by US sanctions.

But in a rare sign of friction within the Iranian regime, Mr Rouhani called on the military to give a full account of how it shot down the plane.

The Ukraine International Airlines Boeing 737-800, travelling to Kyiv and carrying many passengers on their way to Canada, crashed shortly after taking off from Tehran with the loss all 176 lives on board.

For three days Iranian authorities denied any responsibility but after international pressure, the hardline Revolutionary Guards admitted that the plane had been mistaken for a “cruise missile” during heightened tensions with the US.

Hours before, Iranian missiles had targeted two airbases in Iraq housing US forces.

That rocket attack was in response to a US drone strike in Baghdad that killed senior Iranian general Qasem Soleimani.

Iran’s Mehr news agency said Ayatollah Khamenei, aged 80, would lead this week’s Friday Muslim prayers in Tehran’s Mosalla mosque, but did not link the event to the current situation.

It quoted officials as saying “the Iranian nation will once again demonstrate their unity and magnificence”.

The last time Ayatollah Khamenei led Friday prayers in Tehran was in 2012 on the 33rd anniversary of the country’s Islamic Revolution.

Leading Friday prayers in the capital is a symbolically significant act usually reserved for times when Iran’s highest authority wishes to deliver an important message, says Mehdi Khalaji of The Washington Institute for Near East Policy.

Historically, Iranian leaders have left this task to loyal clerics with strong oratorical skills, he adds.

News that an Iranian missile had downed the plane led to days of protests in some Iranian cities, particularly at universities where slogans were shouted calling the Revolutionary Guards murderers and liars.

Iran has arrested several people over the plane crash and President Rouhani said the investigation would be overseen by a “special court”, noting that “the whole world will be watching”.

His Foreign Minister, Mohammad Javad Zarif, acknowledged that Iranians had been “lied to” for days but insisted the government was also kept in the dark.

The Iranian authorities have faced growing pressure on other fronts. The country’s economy is struggling under crippling US sanctions and a nuclear deal it signed with world powers looks close to collapse.

Last year, violent protests erupted across the country after the government unexpectedly announced it was rationing petrol and increasing its price.

The last time Iran’s Supreme Leader led Friday prayers in Tehran was at the height of the Arab Spring.

He used the occasion to deliver a sermon in Arabic – something that could be heard in the Arab world. He wanted to shape events by describing developments in much of the Arab world as an Islamic Awakening. He was wrong.

Now it appears that Ayatollah Ali Khamenei is keen to defend the Revolutionary Guard which has come under severe criticism in Iran for having shot down the Ukrainian plane.

There are fears that he could also call for a further crackdown on students and protesters to save his rule.

The authorities have called for officially-sponsored nationwide marches on Friday in support of the Revolutionary Guard. In Tehran, extensive preparations are under way to bring out as many supporters as possible in another show of force.

But many ordinary Iranians say they want him to admit that his rule has brought nothing but misery.

What about the investigation?

After a meeting in London on Thursday, ministers from five nations that lost citizens in the crash demanded “full co-operation” from Iran in a transparent international inquiry.

Speaking on behalf the group, Canadian Foreign Minister François-Philippe Champagne said: “We are here to pursue closure, accountability, transparency and justice for the victims – Ukrainian, Swedish, Afghan, British, Canadian as well as Iranian, through a full complete and transparent international investigation.

“In the wake of such a horrific tragedy there are many many questions. Families want answers, all of the countries assembled here today want answers, and the international community want answers. The world is waiting for those answers and we will not rest until we get them.”

Mr Champagne said all those responsible must be brought to justice.

On Wednesday, Canadian investigators visited the site of the crash and examined the plane’s wreckage.

They are expecting to be able to participate in the analysis of the plane’s black box flight recorders – a key part of figuring out exactly what happened to the plane and how it crashed.