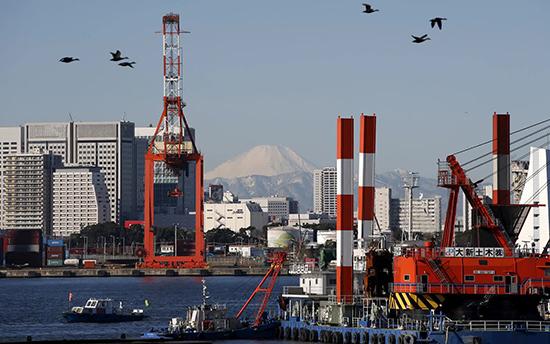 TOKYO (Reuters) – Japanese exports are expected to have fallen for a 13th straight month in December but at a slower pace than the previous month, a Reuters poll found, offering some hope for a recovery in shipments.

Exports in December likely declined 4.2% from a year earlier, the poll of 16 economists showed on Friday, after November’s 7.9% fall.

“Although exports stayed weak, information-related goods such as semiconductor manufacturing equipment and electronic components are picking up,” said Kenta Maruyama, economist at Mitsubishi UFJ Research and Consulting. “We expect exports will recover gradually.”

Analysts also said progress in U.S.-China trade relations after the signing of a first phase trade agreement this week would help Japan’s exports improve in the coming months.

Imports in December are projected to have fallen 3.4% from last year, resulting in a trade deficit of 150 billion yen ($1.36 billion), the poll showed. The deficit was revised to 85.2 billion yen in November.

The poll also showed the core consumer price index, which includes oil products but excludes volatile fresh food costs, rose 0.7% in December from a year earlier after 0.5% growth in November, the poll showed.

“But the pace of growth in core CPI is slow, excluding the impact from a sales tax hike.”

Japan raised the sales tax to 10% in October from 8%, a move that is seen as critical for fixing the country’s tattered finances.

Economists in the poll project the Bank of Japan will keep its minus 0.1% interest rates and maintain the 10-year Japanese government bond yield target at around 0% when it holds a policy meeting on Jan. 20-21.

Sources have told Reuters the BOJ is expected to keep monetary policy steady next week and nudge up its economic growth forecast, as the U.S.-China trade deal and de-escalation in Middle East tensions take some pressure off the central bank for more stimulus.