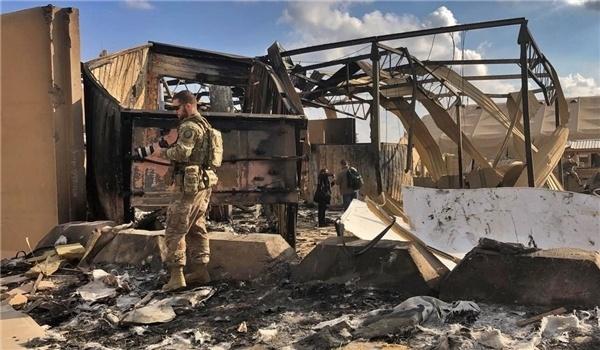 TEHRAN (FNA)- American soldiers recount how they lost contact with their unmanned aerial vehicles (UAVs) in the sky as Iran targeted the military base in Iraq in retaliation for the assassination of its top commander, according to a report.

At the time the military operation was launched, the US Army was flying seven UAVs over Iraq to monitor bases where US-led coalition forces are deployed, AFP reported on Wednesday.

Having received advance warning from superiors, most of the 1,500 US soldiers at the base had been hidden in bunkers for two hours, but 14 pilots had stayed in containers-turned-cockpits to remotely fly the American drones and “monitor essential feeds from their high-powered cameras”, according to the report.

One of the pilots, 26-year-old Staff Sergeant Costin Herwig, who was flying a Gray Eagle, told AFP that he “accepted fate” after volleys of Iranian missiles poured on the air base, with the first missile blasting dust into their shelter.

“We thought we were basically done,” he said.

The American forces stated that the volleys of missiles lasted for three hours, slamming into sleeping quarters directly adjacent to the pilots’ operations rooms and inflicting damage on fiber lines, thus disrupting communication with the drones.

The fiber lines link the virtual cockpits to antennas then satellites that send signals to the Gray Eagles and pull the cameras’ feeds back onto the screens at Ein al-Assad, according to the soldiers.

“No more than a minute after the last round hit, I was heading over to the bunkers on the far back side and saw the fire was burning all through our fiber lines,” said First Sergeant Wesley Kilpatrick, adding, “With the fiber lines burnt, there was no control.”

The Iranian ballistic missiles had also punched holes across Ein al-Assad’s airfield and the control tower was empty, the report added.

The soldiers of “the besieged teams” at the base could not locate the drones after the attack and were left in dark both in the air and on the ground, not knowing whether one of their drones had been shot down, it stated.

“It’s a pretty big deal, because it’s so expensive and there’s a lot of stuff on them (drones) that we don’t want other people to have or the enemy to get,” Herwig noted.

Islamic Revolution Guards Corps Aerospace Force Commander Brigadier General Amir Ali Hajizadeh had disclosed that the communication and dispatch of images by US MQ-9 drones were cut as IRGC’s missile attack was underway on Ein al-Assad military base.

Whie experts and pundits have been surprised by improvements in Iranian ballistic prowess after satellite images displayed accuracy of Iranian missile strikes on US airbase, President Donald Trump has claimed that Tehran’s military operation left no casualties.

Briefing media on operational objective of missile attacks on US bases, Hajizadeh stated that Iran was not after killing anyone although “tens of US troops have likely been killed and wounded and were transfered to Israel and Jordan on 9 sorties of C-130 flights”.

He noted that had Iran intended to kill the American forces, it could have planned high casualty operations to kill 500 US military men in the first step and 4,000 to 5,000 others in the second and third phases within 48 hours.

Supreme Leader of the Islamic Revolution Ayatollah Seyed Ali Khamenei has called the operation “only a slap across the face” of the United States, stating that “military moves like this are not enought. The Americans’ corruption-stirring presence should come to an end”.