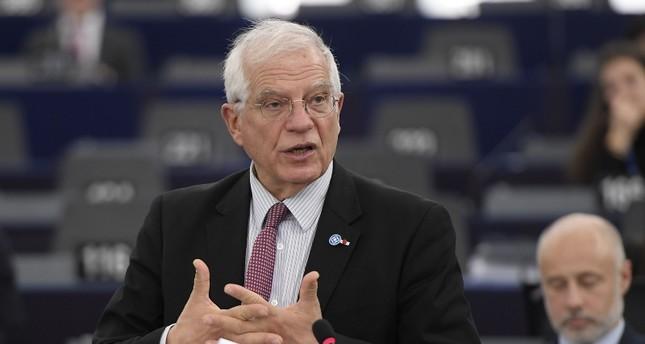 European Union High Representative for Foreign Affairs and Security Policy Josep Borell speaks during a debate at the European Parliament on January 14, 2020 in Strasbourg, eastern France.

“The announcement of a ceasefire in Libya provides an important opportunity to resume dialogue for a political solution to the crisis. It is now to the parties to fully implement it,” he added.

“The EU is ready to help Berlin process and efforts of UN. All Libyans deserve peace and prosperity,” Borell concluded.

On Jan. 12, the warring sides in the Libyan conflict announced a cease-fire in response to a call by President Recep Tayyip Erdoğan and Putin, and they gathered Monday in Moscow to sign an agreement aimed at ending hostilities and starting a political dialogue.

After more than eight hours of talks, the head of Libya’s Government of National Accord (GNA) Fayez al-Sarraj signed the cease-fire deal, but Haftar, the eastern Libya-based putschist general, left for Libya early Tuesday without signing the agreement after asking for more time to consider it.

Since the ousting of late dictator Moammar Gadhafi in 2011, two seats of power have emerged in Libya – Haftar in eastern Libya supported mainly by Egypt and the United Arab Emirates, and the GNA in the capital Tripoli, which enjoys U.N. and international recognition.

In April, Haftar’s forces launched a military campaign to capture Tripoli from the internationally recognized government. Haftar announced on Dec. 12 that he had ordered militants to launch a “decisive battle” to capture the city.

More than 280 civilians and 2,000 fighters have been killed since the beginning of Haftar’s assault on Tripoli, according to the U.N. The fighting has displaced some 146,000 people, with the ongoing violence threatening to plunge Libya into violent chaos to rival the 2011 conflict that led to the ousting and murder of Gadhafi.