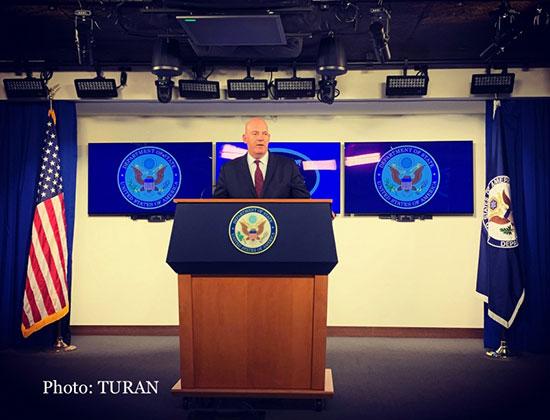 http://www.turan.az-The United States is looking at its military-security relations with Azerbaijan “from a regional context, as far as an increased role that Azerbaijan is seeking on that” Assistant Secretary of State for Political-Military Affairs Clarke Cooper told TURAN’s U.S. correspondent.

Speaking to reporters at Washington’s Foreign Press Center on Wednesday, Cooper announced his country is seeking greater cooperation between Commonwealth of Independent States (CIS) and NATO countries, and it will work on “bringing them closer to each other in 2020.”

Washington plans to spend equity and time discussing this issue this year. “We are talking about incentivizing former Soviet Union states to become more interoperable with NATO states,” he explained.

When asked about possible obstacles for military-security relations with Baku, such as infamous Section 907 of the Freedom Support Act, which bans any kind of direct U.S. aid to Azerbaijan, the assistant secretary said the following:

“Azerbaijan has a growing role in the region. And when we’re looking at the posture in Afghanistan, that certainly plays significantly there. So I would say, in a general sense without getting into other colleagues’ portfolios, from where I sit in Political-Military Affairs and as I work with our embassies in the region, we are looking at it from a regional context as far as an increased role that Azerbaijan is seeking on that for sure.”

It however, wasn’t immediately clear whether the Section 907, which was modified in 2002 to allow for an annual presidential waiver, will be repealed or waived in the foreseeable future. The latest extensions of waiver, which has been issued by the Trump Administration in 2019 after two years of delay, doesn’t mention any termination date.

During his press conference, Cooper also highlighted the current administration’s desire and plans for increasing military-security cooperation globally and as he put it, “why allies and partners around the world should consider America as their security partner of choice, and why they should also be wary of the risks countries take when they flirt with defense acquisitions from China and Russia.”

Washington, he said, offers “the quality of what is provided to a partner,” the accountability that’s associated with that. “The deep analysis and the rigor that’s applied to accounting for foreign policy prerogatives, regional considerations, human rights, and capacities; all of that is applied to the rigor and the accountability that we not only have to ourselves within the Department of State, but also to our Congress and to our taxpayers and to the general public,” he said, adding that transparency is also tied to accountability.

How can the U.S. ensure that countries, either directly or indirectly purchasing American weapons, are not using those weapons for human rights abuses?

Answering TURAN’s question, Cooper said, “that is always a calculus in the receipt”.

“It’s also a historic look as well as a forward look. Most partner state reviews are encompassing of where we’ve assessed, collectively as a government, the human rights status of a particular partner. We have this cyclical report each embassy puts out. It’s called the Human Rights Report. It is a collaborative, coordinated publication. Speaking of transparency, that is something that we report to Congress.”

Yet, he added, the Human Rights Report is just one but not the only reference point. There are states where there may be a particular case, either of a dissident or an American Citizen that may be imprisoned, or there may be cases where we’re concerned about the clampdown of civil society or the reduction of freedom of speech in a particular place. “It is case by case. It is state by state. There is not a blanket assessment,” he explained.

This does also factor into things like Third-Party Transfers. “So many times, there’ll be states that are looking to upgrade a capability or are looking for a next generation of a particular armament and system and they’re going to want to sell it or maybe give it to a particular partner state. That too requires not only a posture analysis; it requires a human rights consideration.” Assistant Secretary added.

Cooper also talked about Turkey. By acquiring Russian S-400, Ankara, he said, lost its ability to be a member of the F-35 Joint Strike Fighter program.

“We have significant military-to-military work and requirements with Turkey. They’re still a partner and they’re still a member-state of NATO, but they have compromised that position with the acquisition of the S-400.”

“So the object lesson for other states is not that Turkey got away with [what it did]. Look what Turkey has lost, and look what they could lose even further,” he concluded.