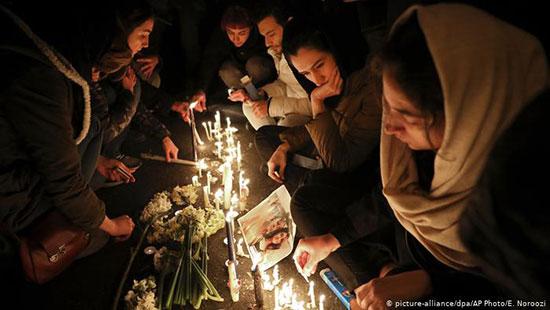 www.dw.com-There is seething unrest in Iranian society — but the situation cannot be compared to that of the revolution of 41 years ago, says guest contributor Rainer Hermann of the Frankfurter Allgemeine Zeitung.

Those who are saying this could herald the end of the Islamic Republic are speaking too soon. Since the Revolutionary Guard admitted that it shot down the Ukrainian passenger jet by mistake, and then concealed the fact for three days, many Iranians have drawn comparisons with the 1986 Chernobyl nuclear disaster. Back then, the Soviet leadership imposed a news blackout for several days. The nuclear catastrophe, and the way it was dealt with, were later regarded as a symbol of the failure of the Soviet Union, which started to break up three years later. However, this scenario is not necessarily going to repeat itself in Iran.

Parallels with the Islamic Revolution are also premature. In February 1979, the Iranian security forces were no longer shooting at demonstrators; more and more were switching sides and joining the revolutionaries, who were rallying around a charismatic leader, Ayatollah Khomeini.

No preconditions for successful revolution

We are not seeing these sorts of conditions for a successful revolution today. The Islamic Revolutionary Guard Corps, which dominated the war against Iraq from 1980 to 1988, are resolved to go on shooting at demonstrators using live ammunition. They are unconditionally loyal to the system, from which they also benefit economically. The demonstrators are neither managing to achieve a critical mass to counter their power; nor do they have a leader around whom they could all rally.

However, the rhythm of protests in the Islamic Republic is starting to accelerate. The slogans are becoming more radical, the protests more bloody. The first big protest, in 1999, lasted one week. Students demonstrated against the closure of a reformist newspaper, but their protest at Tehran University was beaten down.

Ten years later, the rigged re-election of President Mahmoud Ahmadinjehad was followed by the first clashes on the streets of Tehran between demonstrators, predominantly from the middle classes, and the Basij, members of the Revolutionary Guards’ paramilitary volunteer militia. Three million people demonstrated peacefully, demanding the cancellation of the election result, but they failed to build a critical mass that could shake the foundations of the Islamic Republic.

At the turn of the year in 2017-18, tens of thousands took to the streets across the country for the first time. Most were impoverished Iranians protesting against high inflation and unemployment. Later, in November 2019, the tripling of gas prices, which until then had been very low, prompted the biggest wave of protests to date. People demonstrated against the Islamic Republic’s leadership in every province, in big cities and small towns, and set fire to state bank and security forces buildings. The security forces fired live ammunition. More than 1,000 demonstrators were killed.

No wave of protest after the downing of the plane

The most recent protests after the shooting down of the Ukrainian passenger jet began at two Tehran universities, where vigils were held for the victims. However, the initiative didn’t catch on among other sections of the population, and only in a few other cities. The security forces deployed tear gas and fired pellets — but, unlike in November, they didn’t use live ammunition. The protests soon died down.

The shooting down of the passenger jet will undoubtedly accelerate erosion of trust in the Islamic Republic. However, the 80-year-old revolutionary leader Ayatollah Khamenei has shown no willingness to learn lessons and introduce reforms. On the contrary: The Council of Guardians has disqualified many of the candidates for the upcoming parliamentary elections on 21 February. Even one in three of the current representatives will not be allowed to stand. Khamenei wants to make sure that a new generation of disciples loyal to him and to the principles of the revolution will become representatives, and control the parliament – which, in any case, has little say. There is seething unrest in Iranian society; but the Islamic Republic is not about to collapse, at least not in the immediate future.