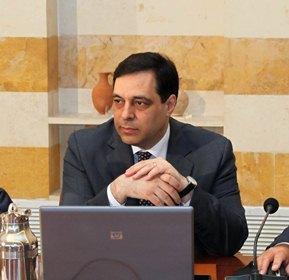 Hizbullah is exerting strenuous efforts to facilitate the formation of the new government and it might propose giving the industry portfolio to the Druze community in return for the social affairs portfolio in a bid to resolve this obstacle, MTV reported on Friday.

It also quoted an informed source as saying that President Michel Aoun will name the economy minister and that a suggestion to “merge it with the defense portfolio” has not been accepted because it is “illogical.”

Baabda sources meanwhile told LBCI television that all the new obstacles that have emerged are eleventh-hour hurdles, suggesting that the government’s formation is still imminent.

“All talk of a dispute between President Aoun and PM-designate Hassan Diab is baseless,” the sources added.

The sources also denied that Free Patriotic Movement chief Jebran Bassil is the one obstructing the formation of the government, noting that “the Druze obstacle has been resolved in agreement with Hizbullah and the Marada obstacle is artificial.”

Bassil is “not seeking a one-third veto power” in Cabinet, the sources added.

Sources close to Diab meanwhile told al-Jadeed TV that the PM-designate wants the government to “enjoy credibility and represent a positive shock.”

“It should gain the confidence of the Lebanese and it should be welcomed by the Arab and international communities,” the sources added, noting that “any attempt to distort the image of the cabinet line-up will weaken its ability to confront the economic, financial and social disaster.”