Since Shankly, via Paisley, Dalglish and Benítez, Liverpool have had several outstanding sides. But how do they measure up?

Statistically, this is likely to be Liverpool’s greatest league season, which for a club with 18 championships is no small achievement. The only season that could conceivably beat this one came last year, when they did not win the title – a reminder that statistics must always be considered in context. Greatness lies not only in numbers.

And in a world in which Juventus can dispense with their manager after five successive league titles, and Barcelona sack theirs after two straight titles while top of the table, in which 95+ points has come to seem standard for a Premier League champion, it’s as well to be aware that domination of a domestic league does not mean quite the same thing that it did in the past.

This should not be seen as in any sense diminishing what this Liverpool side are doing, particularly given a net spend of only around £70m over the past four years and the fact they have had to overcome a brilliant Manchester City; rather it is to say the financial structures of modern football have inflated the gap between top and bottom, through wage bills even more than transfer spending. Even allowing for changes in the size of the league and the number of points for a win, 95 points is easier to achieve than it would have been in the days of Bill Shankly, Bob Paisley or Kenny Dalglish.

All of which is a slightly long-winded way of pointing out that different eras have different tariffs and that greatness comes in many forms. The modern idea of Liverpool was created by Shankly. When he took over the club in 1959, it may only have been 12 years since their previous league title but they had been in the Second Division for five years and had been knocked out of the FA Cup the previous season by non-league Worcester City. He improved Anfield and the training ground, developed a style of play and put together a squad who gained promotion in 1962 and won the title in 1964. It was the following season, though, when Shankly’s first great Liverpool probably reached their peak when they beat Leeds after extra time in the FA Cup final.

The image of Shankly was of a great motivator, someone with the charisma and will to build a club and bring a city (or half of it) with him. But that side were also tactically innovative, playing what was effectively a prototype 4-4-2, although with genuine wingers in Ian Callaghan and Peter Thompson. It was not necessarily a popular way to play, as was made clear by the Mirror’s report on the final, a clash of two sides who had long abandoned the traditional W-M. “More and more clubs,” wrote Ken Jones, “are turning to method and discipline … there was a certain hypnotic element about the whole thing. The fascination lay in trying to assess which side would first break the stalemate.”

But that was the direction football was taking. Contemporary reporters may have been appalled by the spectacle but a modern observer would see nothing especially unusual about the game, other than perhaps to note that it feels more similar in style to modern football than to, say, the final of seven years earlier when a Nat Lofthouse-inspired Bolton had beaten Manchester United. Shankly’s first great side broke new ground for the club and they did it in a way that laid down the template for Liverpool for a little over a quarter of a century.

Liverpool always tended to efficiency rather than flamboyance but that did not mean they didn’t have their moments of transcendence. Perhaps the best Shankly performance was the last, when his second great side, who had won the league and Uefa Cup the previous season, outplayed Newcastle in the 1974 FA Cup final. As Borussia Mönchengladbach had found in the Uefa Cup final a year earlier, Liverpool could physically overpower opponents but Newcastle were beaten at Wembley by a team playing extraordinary pass-and-move football.

Shankly’s retirement that summer was at least partially motivated by a sense it couldn’t get any better than that. In 15 years he had built two great sides, the first a remorseless machine that laid the foundations for everything that followed, the second a more flexible unit ready for the European domination subsequently enjoyed under Paisley, who had probably been leading most of the tactical development behind the scenes anyway.

It’s a mark of how sustained the success was during Paisley’s time in charge – six league titles, three European Cups and a Uefa Cup in nine seasons – that isolating his greatest team is so difficult. The greatest season, though, was probably 1978-79, when Liverpool won 30 of 42 league games and conceded only 16 goals. That was Paisley’s side pressing on the back of a well-drilled offside trap and, every now and again, dismantling opponents. They scored four on four occasions and put five past Derby, six past Norwich and, perhaps most memorably of all, seven past Tottenham, overwhelming them physically and tactically, and slicing them apart with the precision of their passing. That 1978-79 side also averaged more than two goals a game, their total of 85 eight more than any other side managed in a season that decade. 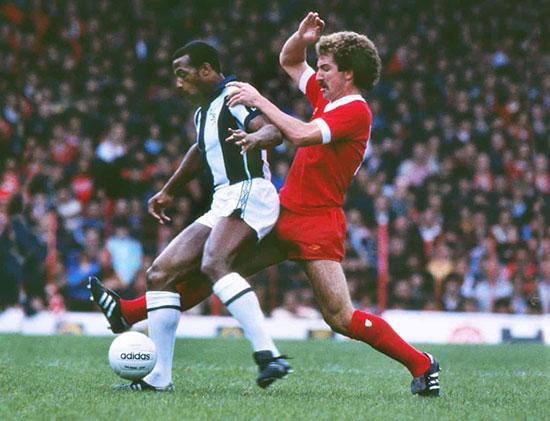 That was a team who featured the organisation of the back four, the creativity of Kenny Dalglish, the wing play of Ray Kennedy, the drive of Jimmy Case, Graeme Souness and Terry McDermott and the intelligence of Steve Heighway but their greatness lies in being the apogee at the centre of a protracted period of success and so lacks the romance either of Shankly’s pioneering first great side or even his second when, having let the first team grow old together, he defied doubts to build another one.

From that second great Shankly side until 1990, Liverpool’s dominance was barely challenged, reaching another peak in 1987-88 with Dalglish’s more attacking team, built around the creativity of three signings – John Barnes, Peter Beardsley and Ray Houghton. That side produced their signature performance with the 5-0 win over Nottingham Forest, a game that, in hindsight, bears an end-of-era feel. Dalglish had moved Liverpool away from their method – perhaps a necessary step as the game changed – and for 30 years they were never quite so good again.

The Rafael Benítez years produced arguably the most memorable occasion in Liverpool’s history but the beauty of the 2005 Champions League final, even leaving aside the comeback, was that it was so unexpected. It was the greatness of the underdog rather than of a team who could claim to be one of the greatest of all time. Which was only reasonable given the financial constraints under which Benítez was operating.

So to Klopp. Although Liverpool had not won the title in 25 years when he was appointed, he was taking over a side firmly entrenched in the upper reaches of the Premier League. There was no need to contrive a way of watering the grass at Anfield as Shankly had; the foundations may have been well hidden but they were there. But that perhaps is more significant when assessing the greatness of the job Klopp has done rather than of the side he has produced.

And this is a very great side, one that essentially updates the principles of Paisley’s best team, pressing opponents and then cutting them apart with rapid passing moves. This side are less inclined to kill games but that is the nature of modern football; law changes and the increasing financial disparity between the elite and the rest have made the superclubs more attacking, particularly at full-back.

Having conceded 14 goals this season, Liverpool will almost certainly not match the defensive record of 1978-79, despite their run of six straight clean sheets, but they will probably score more goals; their goal difference with 17 games remaining is +36, so the +69 of Paisley’s team is within reach. Since last March, the present team have been relentless, a winning machine, but Paisley’s side had longevity, sustained success at home and abroad, which may yet come for Klopp.

But as to who would win a one-off game, making all requisite adjustments for fitness, nutrition and changes in the laws? Well, you’d want to watch it.