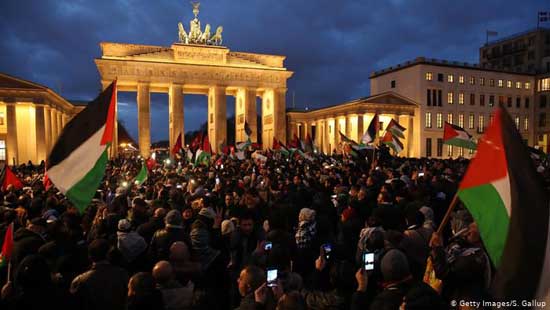 Thousands of farmers have taken to the streets in cities across Germany to protest new environmental regulations. They’re demanding more dialogue to address the increasing challenges facing the agriculture sector.

Farmers brought out hundreds of tractors to block the streets of Berlin and several other cities in northern Germany this weekend, the culmination of months of protests to coincide with the start of International Green Week — a major agriculture and food fair in the German capital.

But what do the farmers want, and what can the government do?

Who is organizing the protest?

This weekend’s demonstrations are different from previous farmers’ demos, as they have been organized by a grassroots movement rather than the official agricultural industry association. Land schafft Verbindung (LsV) (“Country Creates Connection”), as the movement is called, was born of a Facebook group last October and now claims a social media network of 100,000 farmers and agricultural workers. It has organization teams in at least seven of Germany’s 16 states.

German farmers are at the mercy of supermarkets and the food industry in general because they have little recourse when retailers drive down prices to compete with each other. This has had real social consequences: LsV calculates that the average agricultural worker in Germany earns just €22,000 ($24,000), and that more than half of German farmers have shut down their businesses in the last few years.

This economic pressure, according to LsV, has been exacerbated by new government regulations restricting the use of fertilizer, manure and insecticides. Germany has seen a catastrophic crash in insect populations in recent years, while nitrate levels in the water table are a growing concern. The LsV says measures, hashed out by Agriculture Minister Julia Klöckner and Environment Minister Svenja Schulze last year, were agreed without consulting farmers, and they will drive even more farms out of business.

What are the farmers demanding?

The LsV says the restrictive measures will drive up costs, which means supermarkets will look to cheap imports. They say this will end up damaging the environment: food imports are responsible for more carbon emissions through extra transport, and there is no way to influence ecological or social standards in the countries of origin. “And so our regional food production, which is constantly being demanded in society, will be weakened even further,” the LsV says on its website.

The farmers’ demands include:

What has been the government response?

Agriculture Minister Julia Klöckner has argued that environmental measures — delayed for many years — are necessary to avoid  punitive fines from the European Union: up to €800,000 per day in taxpayers’ money. At the same time, in an interview published Friday by news portal t-online, Klöckner said she is sympathetic to the LsV’s demands for more transparency in nitrate measuring systems.

Klöckner also said German consumers need to be prepared to pay more for food. “There is a difference between cheap food and the offer of agricultural products at absolute dumping prices,” she said. “The fact is that within the EU, Germany is at the bottom end when it comes to the proportion of food in consumer costs: it’s below 10%. There’s a lot more that people can afford. It’s about priorities. There’s often enough money for the latest smartphone.”

What’s the view of the opposition parties?

In a debate with LsV spokesperson Dirk Andresen in the Tagesspiegel, the Green party’s parliamentary leader Anton Hofreiter pointed out that, contrary to LsV’s assertions, insect depopulation and the decline of animal diversity has been proven to be related to industrial-scale farming. Green agricultural policy spokesman Friedrich Ostendorff also said society was simply no longer willing to “accept the high costs for the environment, animals and the climate associated with the industrialized agricultural system.”

Kirsten Tackmann of the socialist Left party blamed the crisis on the government’s failure to tackle market inequalities. “The market power of large retail companies blackmails all the local agricultural businesses who create their wealth,” she told t-online. “Without fair production prices the ecological problems in agricultural problems won’t be solvable either. Unfair market rules, adverts with dumping prices for food and land speculation need to be stopped.”