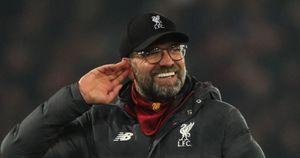 Jurgen Klopp insisted he was not be joining any title-winning parties yet after Liverpool took another step towards the Premier League crown with victory over Manchester United at Anfield.

Goals from Virgil Van Dijk and Mohamed Salah gave the Reds a 2-0 victory over their fiercest rivals which puts them 16 points clear at the top of the table, with a game in hand.

There were some nervy moments with the score only 1-0 entering the closing stages but, after Salah’s added-time breakaway effort, the Kop started to sing about winning the league for the first time this season.

“They can sing whatever they want,” said manager Klopp. “I am not here to dictate what they sing. If our fans were not in a good mood now that would be really strange.

“But we are here to work. It is as simple as that. It is a very positive atmosphere but I have to stay concentrated.

“We play on Thursday against Wolves. I am only interested in that game and nothing else.

“Of course they are allowed to dream and sing whatever they want and, as long as they do their job in the moment we play, all fine. But we will not be part of that party yet.”

Liverpool dominated the contest after Van Dijk headed the hosts ahead on 14 minutes but they had two goals disallowed and spurned a host of other chances to make victory more comfortable.

United, without talismanic striker Marcus Rashford, finished strongly but Anthony Martial blazed over when well placed and the Merseysiders held on.

Klopp said: “It was a really good game, one of the best derbies we have played so far.

“We were very dominant in most periods of the game, we played outstandingly well.

“We were flexible and created chances. We only scored from a set-piece (in those periods) but had other chances, obviously, and the start of the second half was absolutely brutal. We had three or four chances at least, and didn’t score.

“Then it was how it often is, the opponent had the chance to come back and score, but we defended with a lot of passion and a big heart, carried by the atmosphere.”

United boss Ole Gunnar Solksjaer, who revealed he is likely to be without Rashford for at least six weeks, could not fault his players’ application but admitted quality was lacking.

The Norwegian said: “The players have given absolutely everything they’ve got. Commitment is no issue at all.

“The last half an hour I felt we could take something from the game, when we weathered the storm of the first 10 minutes of the second half. We created some chances, put pressure on them, really pegged them back, made them look tired.

“But we didn’t have that quality in that last pass or cross and if you don’t (have that) you don’t get anything from places like this.”

The loss of Rashford, who has joined Paul Pogba and Scott McTominay on the injury list, could force Solskjaer to look for short-term replacements in the transfer window.

He said: “When you miss Scott, Paul, Marcus any club and any team will notice that. So that might mean that we might look at some short term deals to take us to the summer. It might not.”

The Norwegian added: “Today is not about the transfer window. It can’t be about that because we’ve just had a game against the best team in the country at the moment. If there are no questions about the game we can move on.”