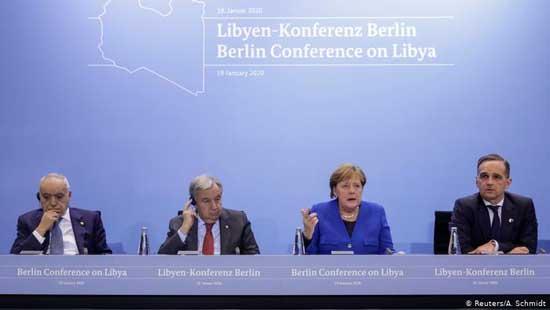 Whether or not the resolutions made at the Berlin Conference on Libya become reality remains to be seen. But DW’s Jens Thurau thinks the multilateral attempt to solve the conflict has been worth it nonetheless.

For many years, German politics has struggled to take greater responsibility on the world stage. Better said, to take on a responsibility that fits Germany’s role as a leading industrial powerhouse and a central force in the heart of Europe. It’s often unclear what that even means. Greater military strength? Hardly. Germany’s historical legacy sets clear limits here. But as a force that brings greater weight to classic acts of diplomacy? That’s something Germany can do.

On Sunday in Berlin, Chancellor Angela Merkel welcomed presidents from France, Russia, Turkey and Egypt. She welcomed  prime ministers from Great Britain and Italy. The US sent a secretary of state and representatives from the United Arab Emirates and the European and African Unions came as well.

The source of all this commotion, Libya, was also present, represented by its two warring factions — the UN-backed government of Fayez al-Sarraj and General Khalifa Haftar, whose army currently controls large portions of the country.

It says a lot about the situation in Libya that these two parties were onlookers (who didn’t speak with each other directly) more than anything else. Since the fall of former ruler Moammar Gadhafi in 2011, Libya has been in a never-ending war in which countless international players have since gotten involved. It’s about gas and oil and especially about refugees, who are venturing out of Libya and across the Mediterranean Sea with the help of human traffickers, or who are languishing in bitter conditions in Libyan prisons. It’s also about Islamist terrorism. People have always paid less attention to the drama in Libya than to, say, the war in Syria. But the Libya conflict has been a proxy war for a long time.

It’s therefore all the more significant that the German government managed to take the initiative and bring international powers to Berlin in an open attempt not to temper the warring factions in Libya but rather to contain the complex network of international backers, arms dealers and economic profiteers currently involved. Without international support, it’s clear that neither the official government nor the warlord Haftar would be in a position to negotiate. German diplomatic efforts were and are the right approach.

Or any diplomacy, for that matter: In times of rampant nationalism, the plan to find a UN-backed solution for Libya deserves recognition alone. This is particularly significant considering these events are unfolding at a time when people are starting to wonder about Germany’s lack of participation in many global crises. Now an internationally-monitored  ceasefire is on the way as well as a requirement to abide by the UN weapons embargo.

Here, Germany is certainly in a better position to moderate than many others: Germany abstained from voting on Libya at the UN Security Council meeting in 2011. At the time, military action against Gadhafi came above all from the US, Great Britain, and France, as is often the case. Germany received a lot of criticism at the time, but today that decision was an advantage.

So how likely are the resolutions made in Berlin to have real success? The international lust for Libyan gas and oil will remain. However, it’s above all in the interest of the Europeans that diplomacy prevails in Libya. The most recent flow of refugees four years ago, at the time through the Balkans, already pushed the EU to the edge of its capacities and flamed populist and nationalist sentiments.

The main route out of Africa towards Europe now goes through Libya. If the Berlin Conference is to be taken seriously, then the “strong monitoring” of the ceasefire that the resolutions require needs to be heavily secured with soldiers over a long period of time, above all with European forces. Having taken the diplomatic initiative, Germany can’t expect to stand on the sidelines in this regard, even though the chancellor evaded the question after the conference. It’s the only way for the continent to prove it means business when it says it won’t let a conflict with serious consequences unfold on its doorstep. That, instead, it will contribute to de-escalation.

Experts on the situation in Libya have spoken of a “parallel reality” at the Berlin negotiations. That might well be. International influence over the weapons, oil, and money certainly hasn’t helped Libya. For now, the Berlin Resolutions are just a piece of paper. But it’s better than nothing. And for Germany, in any case, it’s an attempt to more clearly define what that means: greater responsibility for the Germans.