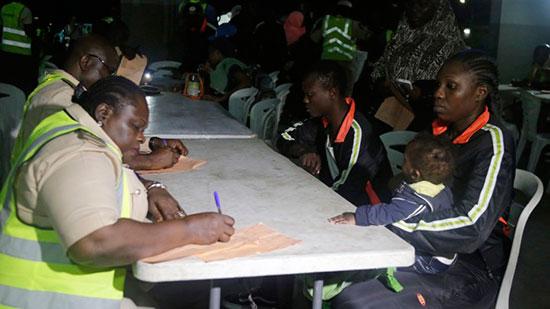 Migration can be driven both by a richer country’s doing, as well as a poorer one’s undoing.

LAGOS—About a year ago, Dolapo Oni appeared to have it all. He was the head of energy research for a pan-African bank in Nigeria’s biggest city, had a healthy (and growing) amount of savings and investments, and ran an e-commerce business on the side. He even liked his local gym.

Then he resigned and moved with his family to Canada, eventually getting a job as an investment associate in a wealth-management firm in Calgary. His previous employer in Lagos promoted someone to replace him soon after, but, like Oni, he quit and moved to Calgary. This time, rather than search for another replacement, the bank disbanded the energy-research team.

In some ways, Oni’s story (and that of his successor in Lagos) is not unusual: a skilled professional leaves a job at home in search of work in wealthier parts of the world, betting that the short-term instability of uprooting an established life will be worth it in the long term. The Onis are part of an ongoing exodus of middle-class Nigerians to Canada in particular—Nigeria ranks in the top 10 in terms of the number of skilled workers leaving for Canada over the past four years. The sparsely populated North American country has long been a favored destination of immigrants around the world because it offers economic opportunities, a strong social safety net, and a diverse population.

More recently, the Nigeria-to-Canada route has had another driver, one that is propelled both by Ottawa’s doing and Abuja’s undoing—whereas the political and economic situation in Nigeria has not improved, many of these immigrants have mostly been drawn by a tweak to Canadian immigration rules.

In 2015, Canada implemented a new system for taking in skilled immigrants, using a points-based calculation in which applicants are scored on the basis of their age, work experience, education level, and language skills. It aims to prioritize those who are most skilled and ease their entry into the country, while encouraging applicants to settle in less populated parts of Canada. Australia and New Zealand use similar systems, and British Prime Minister Boris Johnson, fresh off an electoral victory in December, has said he wants to implement one, too.

Canada’s, however, is the most advanced. According to the Organization for Economic Cooperation and Development, the country has “the most elaborate and longest-standing skilled labour migration system” of its member states, and 60 percent of its foreign-born population is “highly educated”—the highest proportion in the organization.

Now Canada is expanding its effort: the immigration minister, Ahmed Hussen—who himself moved to Canada in 1993 as a refugee from Somalia—announced in 2018 that the country wanted to attract more than 1 million people from 2019 to 2021, equivalent to nearly 3 percent of the overall population.

The transparency of the system—Canadian-government websites outline how many points are awarded for specific skills, experience, or other criteria—lets potential immigrants see whether they could make the cut. Oni told me that once he had decided to emigrate, he had wanted to move to Britain, Canada, or the U.S., in that order, but prioritized Canada because the visa terms were less stringent (and added that he was dissuaded from the U.S. because of persistent reports of gun violence and police shootings of black men).

Here in Nigeria, to say that the middle class has caught Canada fever would be an understatement. The subject of moving overseas has become a conversational icebreaker in Lagos, Port Harcourt, and Abuja. (The best place to have a heart attack in Toronto, one joke here goes, is in a taxi—because the driver is likely an immigrant doctor.) An entire economic system has emerged to help applicants navigate the bureaucracy: Online marketplaces are well stocked with used furniture and cars being sold by those making the move. In terms of emotional support, family WhatsApp groups are filled with relocation tips and prayers for those applying. When I started taking French lessons a couple of years ago (to help navigate West Africa, not to move to Canada), many of my classmates had signed up in order to garner additional points to bolster their applications, and to improve their chances of securing a job in Quebec, where French is the dominant language. All of this reached a crescendo in April 2019, when a news website claimed that Canadian Prime Minister Justin Trudeau had asked Nigerian President Muhammadu Buhari to send 1 million Nigerians to Canada. The story, which was false, went viral.

In effect, then, thanks to a tweak to an immigration system in a richer country, a developing one has suffered serious consequences, losing skilled professionals—many of whom are highly educated and would be expected to make outsize contributions to a state’s economy, tax income, and society more broadly. In Nigeria, the conveyor belt of young talent that is supposed to replace those who are emigrating is whirring slowly, and the impact is apparent: The country’s educational institutions groan under the weight of frequent strikes by underpaid staff protesting poor funding and outdated infrastructure; medical procedures are regularly delayed because of a shortage of specialists; and companies—like Oni’s bank—are closing down entire departments to cope with staff exits.

Middle-class Nigerians, much like citizens of other developing countries, argue that they are leaving to give their families more options and greater security rather than waiting for their own country to realize its potential. It is a familiar story—what is now Africa’s largest economy is no stranger to the departure of its best talents. In the 1970s and ’80s, skilled and semi-skilled Nigerians left the country, mostly for the United States, Britain, and elsewhere in Europe, fleeing the rule of successive military juntas and economic mismanagement. A 2010 report by the Migration Policy Institute, a Washington, D.C.–based think tank, found that by the late 1970s, about 30,000 Nigerian professionals had graduated from universities and colleges in the United Kingdom but never returned to Africa; by the mid-’80s, 10,000 Nigerians were in the United States, many of them highly skilled. That brain drain had a knock-on effect, opening a route for these immigrants’ relatives to leave Nigeria as well.

Nigerians today face similar challenges. Though the country is now a democracy, it is still smarting from a 15-month recession in the early years of Buhari’s presidency. Insecurity is also rife: Northeastern Nigeria is grappling with a decade-long insurgency, while a kidnapping epidemic is under way in the northwest and the Niger Delta.

The Nigerian government itself appears unperturbed by the outbound migration of its professionals: The labor minister, Chris Ngige, told journalists last year that the country was exporting its best minds because it had a surplus of talent and, in any case, “when they go abroad, they earn money and send [it] back home here.”

“Canada gets skilled workers who are productive and contribute more to economic activities than they consume,” Nonso Obikili, the chief economist at Nigeria’s BusinessDay newspaper, told me. And he reiterated that Nigerians abroad were sending remittances to relatives back home, a crucial source of revenue for the country. “All these skilled workers are not totally cutting off links with Nigeria.”

Eromo Egbejule is the West Africa editor of The Africa Report.