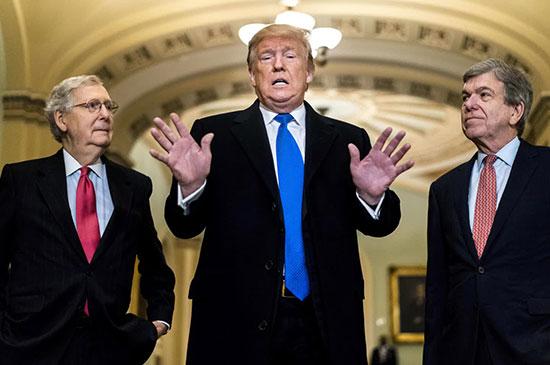 By Rachael Bade and Seung Min Kim   – The Washington Post

President Trump and Senate Majority Leader Mitch McConnell huddled privately in the Oval Office this month to discuss a judicial nominee. But the president, seething over the stain of impeachment, had something else on his mind: He wanted to know how the GOP could short-circuit his trial.

During the Jan. 8 session, Trump rejected the House charges against him, abuse of power and obstruction of Congress, calling it a shoddy case that would never hold up in court. He urged McCon­nell (R-Ky.) to use his power to end the trial before it began.

McConnell cautioned Trump, as he had many times before: Such a vote to dismiss the charges would fail in the Senate and generate embarrassing headlines, he flatly told the president. In addition, it would split Senate Republicans at the outset of Trump’s impeachment trial — which will probably be among the most challenging times of his presidency.

“Better to be unified than divided,” McConnell said, according to two people with knowledge of the exchange who spoke on the condition of anonymity to be frank.

The warning underscores the advisory role McConnell has been playing to Trump as he seeks to protect his fragile Senate majority and his own reelection this year while ensuring a smooth acquittal of the president. Although the men are polar opposites — and initially had a rocky and somewhat awkward relationship — the president has come to view McCon­nell as an asset and reliable counselor, deferring to him on impeachment strategy, even at times against his own no-holds-barred instincts.

When the president last fall criticized Senate Republicans who chided his behavior toward Ukraine, it was McConnell who encouraged Trump to engage with those members to win their confidence, rather than striking back. When the president pushed to use his impeachment trial to target potential presidential rival Joe Biden, it was McConnell who persuaded him to embrace a no-witness strategy preferred by the majority leader and many rank-and-file senators.

“I think the president’s learned over time to trust his advice,” said Sen. John Cornyn (R-Tex.), a McConnell ally.

The next few weeks will test that relationship, particularly because the men have opposing views of what the trial should be. McConnell and his more moderate GOP senators facing difficult reelection bids want the trial to be serious — a markedly different tone than the reality-TV-star-turned-president who prefers a brawl. It remains to be seen whether Trump goes with his gut, as he likes to do, or listens to the advice of the longtime Republican leader.

The account of the interactions between Trump and McConnell is based on interviews with a dozen senators, Senate aides and White House officials close to McConnell or the president, some of whom spoke on the condition of anonymity to discuss private deliberations.

The first test may come soon after the trial begins in earnest Tuesday, when one of Trump’s allies could push for a motion to dismiss the case despite McConnell’s advice. Just five days after meeting with the majority leader, Trump took to Twitter to continue advocating for such a move, writing that “many believe that by the Senate giving credence to a trial . . . rather than an outright dismissal, it gives the partisan Democrat Witch Hunt credibility that it otherwise does not have.”

Officials familiar with the White House strategy say no final decision has been made, warning that it will probably be a last-minute call.

Continued consideration of the move comes as McConnell warned last week that there is “little or no sentiment” in the GOP caucus to dismiss the charges, and Sen. Lindsey O. Graham (R-S.C.) said Sunday that such a motion is “dead for practical purposes.” But Sen. David Perdue (R-Ga.) said he “very well might” move to hold a vote to dismiss the charges, even at the outset, and even if it fails.

“That sends a message,” Perdue said. “One . . . that this is an illegitimate process that’s being handed to us, and if we accept it the way we’re accepting it now, it’s a bad historic precedent.”

The political odd couple of Trump and McConnell has proved intriguing since the New Yorker captured the GOP presidential nomination in 2016. While the malleable Trump, a former Democrat, shoots from the hip and often overshares on social media, the lifelong conservative and guarded McConnell says little, calculating his moves and keeping his own leadership team guessing.

Trump is immensely popular with the GOP base, wielding his Twitter account like a megaphone that fires up Republican voters across the country. McConnell, by contrast, was booed at the 2016 Republican National Convention because of his longtime inside-the-Beltway status — though that was well before he helped Trump fulfill some of his campaign promises, endearing him to the president’s allies.

McConnell’s staff isn’t sure whether the majority leader has ever tweeted, but people close to the president and the senator say their mutual respect was borne out of three years of success in remaking the federal courts and securing a tax overhaul in December 2017 — after Trump blamed McConnell for the failure of the GOP to repeal the 2010 Affordable Care Act.

McConnell, who blocked former president Barack Obama’s nominee to the Supreme Court in 2016, has changed Senate rules to speed confirmation of 187 of Trump’s judicial nominees, including two conservatives to the Supreme Court. In a November ceremony on judicial appointments, Trump praised McConnell: “Generations from now, Americans will know that Mitch McConnell helped save the constitutional rule of law in America. It’s true. It’s for a long time.”

McConnell’s stature in Trump’s eyes only grew when McConnell refused to give up on one of those high court nominees, Brett M. Kavanaugh. During the confirmation process, California professor Christine Blasey Ford accused Kavanaugh of sexually assaulting her when the two were teenagers.

During the Senate hearing with Ford, the president phoned McConnell and asked whether he needed to withdraw the Kavanaugh nomination. McConnell encouraged him not to do it.

The Senate narrowly confirmed Kavanaugh to a lifetime seat on the Supreme Court.

Those close with the president say he heeds McConnell’s advice in part because he has learned lessons from ignoring him — at least twice. In the fall of 2017, McConnell told the president that the GOP needed him to ensure then-Sen. Luther Strange (R-Ala.) defeated primary challenger Roy Moore in the special election to fill then-Attorney General Jeff Sessions’s seat. But while Trump stumped for Strange, he tacitly allowed his former strategist Stephen K. Bannon to work on Moore’s behalf, undercutting McConnell’s work — according to two people familiar with what occurred.

Moore won the Republican nomination but faced allegations of sexual misconduct with teenage girls in the 1970s. While McConnell and the Senate GOP apparatus immediately shunned Moore, Trump ended up supporting him by arguing that the Senate seat needed to stay in GOP hands — although Republicans ultimately lost to Democrat Doug Jones.

The lessons continued into 2018, when Trump threatened to shut down the government to secure money for his U.S.-Mexico border wall. McConnell warned the president that he would not be successful and would take a hit in the polls, but Trump sided with conservatives and shuttered the government before the holidays.

The president relented 35 days later without money for the wall he demanded — as McConnell predicted — and ultimately resorted to an emergency declaration to reroute federal funds for the border barrier that he had repeatedly promised Mexico would finance.

As the impeachment trial has neared, the men have been in more frequent contact, sometimes talking several times a day. And often times, Trump has listened to McConnell’s counsel — at least so far.

McConnell, for example, was the one who told the White House in September that the president should release the transcript of his July phone call with Ukrainian President Volodymyr Zelensky, a conversation at the heart of the impeachment case.

And while Trump considered adding a slate of ardent House GOP defenders to his legal team for the Senate trial — including Reps. Jim Jordan (Ohio) and John Ratcliffe (Tex.) — McConnell counseled against it. Trump’s legal team announced Friday did not include the GOP lawmakers, although they may play a broader role in defending him publicly, away from the Senate chamber.

McConnell said last month that he was working in “total coordination” with the White House on impeachment, drawing criticism from Democrats.

“I think it would be unrealistic to expect that there’s not going to be communication between the president’s party’s representatives in the Senate and his White House,” said Sen. Chris Murphy (D-Conn.). But “I think McConnell’s level of coordination and his unapologetic advertising of it has been extraordinary and problematic.”

But McConnell, who has given repeated floor speeches slamming the House impeachment process, remains unaffected by such criticism — and is intent on leading an impeachment trial that is as politically painless as possible for Trump and the Republicans.

“I think President Trump, who came with a great skepticism about anybody who had been here, has developed a real appreciation for Senator McConnell’s political skills and inside-player skills in terms of what it takes to make the legislative process work,” said Sen. Roy Blunt (R-Mo.). “It’s turned into a pretty good partnership.”

Impeachment: What you need to read

Here’s what you need to know to understand the impeachment of President Trump.

What’s happening now: Trump is now the third U.S. president to be impeached, after the House of Representatives adopted both articles of impeachment against him.

What happens next: Impeachment does not mean that the president has been removed from office. The Senate must hold a trial to make that determination. The House voted Wednesday to appoint impeachment managers and transmit the articles of impeachment to the Senate. Senate Majority Leader Mitch McConnell (R-Ky.) has said the trial will get underway “in earnest” next week. Here’s more on what happens next.

How we got here: A whistleblower complaint led Pelosi to announce the beginning of an official impeachment inquiry on Sept. 24. Closed-door hearings and subpoenaed documents related to the president’s July 25 phone call with Ukrainian President Volodymyr Zelensky followed. After two weeks of public hearings in November, the House Intelligence Committee wrote a report that was sent to the House Judiciary Committee, which held its own hearings. Pelosi and House Democrats announced the articles of impeachment against Trump on Dec. 10. The Judiciary Committee approved two articles of impeachment against Trump: abuse of power and obstruction of Congress.

Listen: Follow The Post’s coverage with daily updates from across our podcasts.

Want to understand impeachment better? Sign up for the 5-Minute Fix to get a guide in your inbox every weekday. Have questions? Submit them here, and they may be answered in the newsletter.

Rachael Bade is a Congress reporter for The Washington Post, primarily focusing on the House. Her coverage areas include House Democrats’ oversight of the Trump administration as well as policy clashes with the White House, the dynamics animating the historic freshman class and the inner workings of the Democratic leadership team. Follow