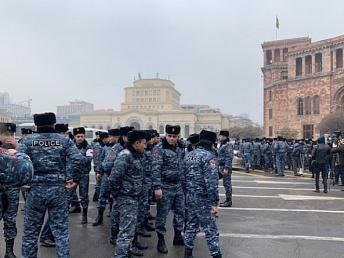 YEREVAN, January 21. /ARKA/. Meat traders and cattle breeders closed a street in downtown Yerevan today in protest against a government decision that obliges cattle breeders to have their animals slaughtered at slaughterhouses. The decision entered into force on January 15, 2020, causing the anger also of meat merchants . The protesters blocked traffic on Tigran Mets Avenue for some time.

Cattle breeders complain that under the decision the slaughter of cattle must be preceded by a veterinary check, however, many rural communities either have no vets at all or they are not enough to service all the communities.

Besides, they are obliged to leave the skin and insides of the cattle to the slaughterhouse, and are paid only for the ‘net’ meat only. As a result, the net profit from a cow or an ox makes from 30 to 50 thousand drams.

Protesters are also unhappy that slaughterhouses do not provide vehicle for transporting livestock. Moreover, very often slaughterhouses grade the meat as third-rate, paying a lower price. Cattle farmers consider this unreasonable as there are no clear-cut criteria for evaluating the quality of meat. Cattle breeders also are unhappy that they have to sell their milk at 100 drams per one liter, which later is resold three to four times higher.

In recent days, meat traders and cattle breeders have been staging protests in Yerevan against the mandatory slaughter of cattle at slaughterhouses, saying their number across the country is not enough to meet demand.

The State Food Safety Service said also that soon 23 more slaughterhouses will be built across Armenia to meet the entire demand. ($ 1 – 479.76 drams).