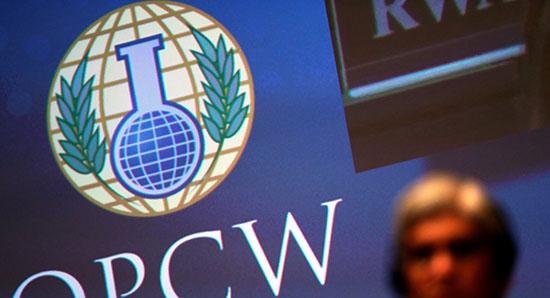 A former inspector with the OPCW has accused the chemical weapons watchdog of issuing a sanitized report on the alleged 2018 attack in Douma, Syria, arguing it ignored serious reservations of its own fact-finding team.

The OPCW’s final report on the Douma incident, released last March, omitted key findings of its own inspection team which would have cast serious doubt on whether a chemical attack took place at all, a now former OPCW specialist, Ian Henderson, told members of the United Nations Security Council in a recorded video address – after his visa application to attend the meeting in person was rejected.

“The findings in the final [Fact Finding Mission] report were contradictory, were a complete turnaround with what the team had understood collectively during and after the Douma deployments,” Henderson said.

Even though several members of the fact finding team “had serious misgivings that a chemical attack had occurred” as early as July 2018, the organization’s final report – compiled by another group that never even visited the incident site – nonetheless concluded there were “reasonable grounds” to all but pin the blame for the attack on Damascus.

Sanitized of any dissenting opinion, the report ignored “findings, facts, information, data or analysis” gathered by the team in the areas of witness testimony, toxicology studies, chemical analysis, as well as ballistics, the retired inspector said.

Washington and its allies blamed the Syrian government for the Douma incident, with the US, France, and the UK launching joint strikes against Syria a week later, well before any official investigation could even start, and even delaying it. Western politicians and media claimed at the time – based purely on visual materials and witness accounts provided by the notorious White Helmets and other militant-linked sources – that the Syrian government forces had ‘highly likely’ dropped two poisonous gas cylinders, killing scores of civilians.

Henderson carried out a closer analysis of that pair of cylinders mysteriously found in a residential area of Douma. His ‘Engineering Assessment’ was initially leaked last May, laying out a number of hypotheses for how the cylinders wound up at the site in Douma. Most significantly, it noted a “higher probability” that they were “manually placed” instead of being “delivered from aircraft,” suggesting a party other than the Syrian government may have planted them there.

In my case, I had followed up with a further six months of engineering and ballistics studies into the cylinders, the result of which had provided further support for the view that there had not been a chemical attack.

Subsequent WikiLeaks publications would reveal that a senior OPCW official ordered “all traces” of Henderson’s assessment to be scrubbed from its archives. But despite the internal battle undermining the OPCW’s credibility, Henderson insisted the dispute should not be a matter of “political debate,” urging for any discrepancies to be “properly resolved… through the rigors of science and engineering.”

The informal UNSC meeting to assess the situation and inconsistencies around the FMM’s report was convened at the request of Moscow on Monday. The US and its allies accused Russia of trying to “discredit the well-respected OPCW and its staff,” even though Moscow insists that the goal, on the contrary, was to restore trust in the organization.

“The chemical incident in Syrian Douma. Why is it so important? Because it was a justification of missile strikes by the US, France and the UK in April 2018, who immediately named the Syrian Government guilty,” said Vassily Nebenzia, Russia’s permanent representative to the UN, who accused the US and allies of “crying wolf.”

Since not so long… ago, some of our colleagues invented a new paradigm, the world of ‘highly likely’.

Besides listening to Henderson’s testimony, the UNSC was addressed by Russia’s OPCW representative, Alexander Shulgin, and the chief of an NGO that had previously interviewed over 300 residents of Douma, shattering the official Western narrative.