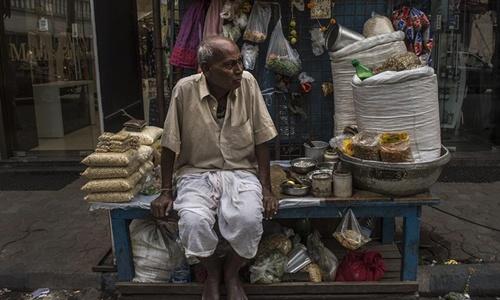 A vendor waits for customers at a market place in Kolkata, India on October 14, 2019. Photo: Xinhua

Will India reclaim its title as one of the world’s fastest-growing economies this year? Probably not, given a plethora of dead-end problems affecting its economy.

The awkward visit Amazon founder and CEO Jeff Bezos recently paid to India may only reveal the tip of the iceberg when it comes to the problems facing the South Asian country. While Bezos said the company would create 1 million jobs and invest $1 billion in India over the next five years, his three-day visit was overshadowed by anti-Amazon protests and critical comments from officials.

Although the Indian government has always vowed to boost its economy by attracting more foreign investment, Amazon is not so welcome in India, where most believe that marketplace platforms like Amazon will be devastating for the nation’s brick-and-mortar retailers. To win votes, politicians are mostly inclined to protect retailers from outside competition.

What Amazon is facing points to the predicament for India’s economic development. Considering the size and quality of its labor force, the economic structure, and its industrialization level, it’s obvious that the country must make radical reforms to gain continuous momentum for its economic growth.

While the Modi government has shown willingness to make reforms, deep-rooted problems like cultural factors and the social structure – as well as the land system – make it nearly impossible for such reforms to succeed. India’s economic development is facing a dead end, and its government can hardly find an efficient solution to that problem.

India, with a huge market and more than 1 billion people, has long been seen as the next “world’s factory” with great growth potential, attracting many multinational companies, especially smartphone makers, to build plants. For instance, Samsung said in a regulatory filing this month that it is investing $500 million to set up a plant to produce displays in India.

Yet, building smartphones alone cannot generate the impetus for the entire economy. Smartphones are just gadgets. How to unleash market vitality is what really matters. Take China’s experience as an example: without full competition in its retail sector, the country wouldn’t have seen the rise of e-commerce giants like Taobao and JD.com, or mobile payment giants like Alipay.

India also needs to stimulate the market to inject new vitality into its economy and usher in social changes. But it’s seeing  growing resistance, which is especially stubborn amid today’s economic downturn. India’s GDP growth fell to 4.5 percent in the September quarter, down from the 8 percent or so level recorded 18 months earlier.

Some from the Modi government may call the slowdown “cyclical,” which seems self-deceiving as no cyclical factor could cause such a rapid cooling in economic growth. If anything, “dead-end” problems are becoming more and more apparent, weighing down the Indian economy in many ways.