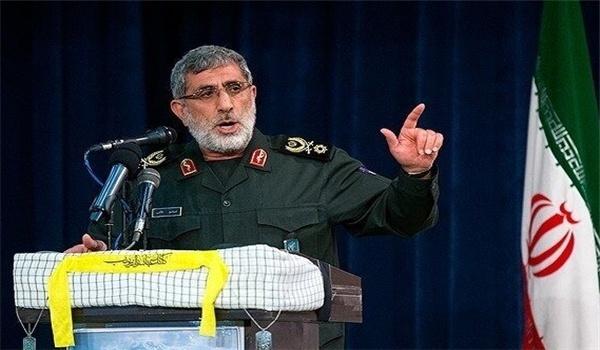 “They hit General Soleimani in a cowardly act, but there are freedom-seekers across the world who want to revenge for him with God’s help, and God willing, we will hit his enemy chivalrously,” General Qa’ani said, addressing a ceremony in Tehran on Monday.

“Our enemy understands no language but force and therefore, we should stand against them strongly,” he added.

General Qa’ani, the former deputy of the IRGC Qods Force, was appointed as the Quds Force commander after Lieutenant General Qassem Soleimani was assassinated in a US drone strike on Baghdad International Airport in Iraq on January 3.

On January 8, the IRGC Aerospace Force started heavy ballistic missile attacks on US Ein Al-Assad airbase in Southwestern Iraq near the border with Syria and a US operated airbase in Erbil in retaliation for the US assassination of General Soleimani.

The second IRGC reprisal attack targeted a US military base near Erbil airport in Iraqi Kurdistan Region in the second leg of “Martyr Soleimani” reprisal operation.

Iraq said the attacks had not taken any toll from its army men stationed at these two bases. The US army had blocked entrance into Ein Al-Assad to everyone, including the Iraqi army.

It was the first direct attack on the US army ever since world war two.

The IRGC officials said none of the missiles had been intercepted.