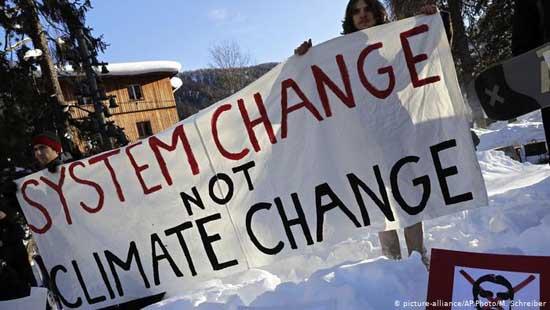 Davos is a picturesque holiday resort in Switzerland. And, once every year, it hosts the World Economic Forum. The summit is no longer the elitist gathering it once was, writes Manuela Kasper-Claridge.

It’s easy to bash the World Economic Forum (WEF). About 3,000 attendees are expected to gather this week for the WEF in Davos, Switzerland — including no fewer than 116 billionaires, the CEOs of multinational corporations and the bankers behind BlackRock. Heads of state such as US President Donald Trump and his Brazilian counterpart, Jair Bolsonaro, will be there, as will heads of government, among them German Chancellor Angela Merkel and Italian Prime Minister Giuseppe Conte.

Once again, it seems, the world’s elites are meeting to discuss the global problems they don’t really understand. Though it’s common to portray the WEF as a summit of aloof leaders, that couldn’t be further from the truth. Granted, Champagne is certainly enjoyed in Davos, and I can’t rule out some attendees engaging in excessive behavior. But most of those who come to Davos work hard and tirelessly.

The WEF brings together people who would usually make efforts to avoid each other. And many participants tend to be so busy working for their companies or governments that they otherwise don’t have time see what’s happening elsewhere in the world.

Contrary to what some might expect, topics such as social inequality, climate change and how to make capitalism more just are addressed at the WEF, as are questions of how technology can be marshaled to tackle poverty or how to deal with depression and loneliness. At the WEF, refugees, the chairmen of various boards and representatives of governments share a stage — discussing pressing issues and listening to each other. Representatives of nongovernmental organizations come to Davos, as well, along with

‘Our house is on fire’

Klaus Schwab, who founded the WEF, should therefore be congratulated for creating this unique platform — even though it’s predominantly about discussions rather than concrete action. This lack of action is the real problem. Many rightly wonder when the issues discussed and announcements made in Davos will finally be implemented.

“Our house is on fire,” environmental activist Greta Thunberg said at last year’s WEF. She will be in Davos this year, too, to continue pressing for change. Together with several scientists, Thunberg plans to stay in a tent at an altitude of 1,800 meters (5,900 feet) in the surrounding mountains to highlight the impact that climate change is having on the Arctic.

Thunberg, along with other activists, is using Davos to draw attention to global problems — and major corporations are increasingly under pressure to act. Today, simply releasing statements of intent no longer cuts it. And for corporations to pursue maximum profit at all cost is neither sustainable nor sensible. It’s time to tackle the growing inequality.

The people attending Davos and the discussions they will hold reflect the global status quo. This is why dialogue and open talks between the participants is so essential — just like the pressure exerted by those who are not part of the so-called global elite.