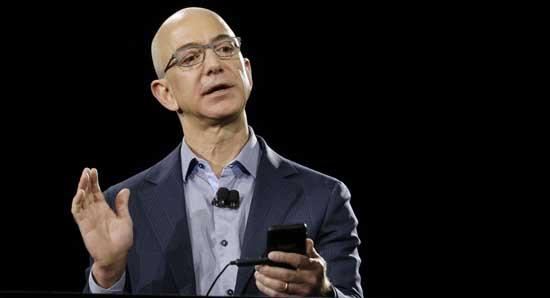 The Guardian reported in a potentially far-reaching exposé that a forensic analysis found that Amazon’s CEO had had his phone infiltrated by Saudi hackers after receiving an infected video from the Saudi Crown Prince.

Saudi Arabia has denied any role in the hacking of Jeff Bezos’s phone, which is speculated to be linked with recent intimate leaks in the US media regarding his extramarital affair.

“Recent media reports that suggest the Kingdom is behind a hacking of Mr. Jeff Bezos’ phone are absurd,” the Saudi Embassy in the US has tweeted.

“We call for an investigation on these claims so that we can have all the facts out.”

The statement came just hours after The Guardian reported, citing unnamed sources, that the world’s richest man, Jeff Bezos, had his mobile phone hacked in the spring of 2018 after receiving a malicious file via WhatsApp from the personal account of Mohammad bin Salman, the Crown Prince of Saudi Arabia.

It is understood that “large amounts of data” were stolen from Bezos’s phone within hours, although the report failed to specify which data was taken.

According to The Guardian, the analysis has been reviewed by Agnes Callamard, the same human rights expert who led the UN investigation into the killing of journalist Jamal Khashoggi in the Saudi consulate in Istanbul later that year.

Khashoggi was a Saudi journalist and contributor to The Washington Post, a newspaper owned by Jeff Bezos which published critical coverage of the Saudi Kingdom and the Crown Prince himself.

Riyadh blamed the murder of Khashoggi on a “rogue operation”, while US intelligence agencies reportedly concluded that it was ordered by Mohammad bin Salman, or MBS, as his name is often abbreviated.

MBS denied any involvement, but said he took “full responsibility as a leader in Saudi Arabia, especially since it was committed by individuals working for the Saudi government”.

A Saudi court sentenced five people to death and jailed three others last month in connection with the case. Several senior figures were cleared of wrongdoing during the trial, including the Prince’s former top adviser, Saud al-Qahtani, and the Saudi consul-general in Istanbul at the time, Mohammed al-Otaibi.

The Guardian links the Khashoggi killing with the leak of Besoz’s private messages to Lauren Sanchez, an American journalist and pilot.

Just three months after the killing, the US tabloid National Enquirer revealed the findings of what it called a four-month investigation into an affair between the pair. Neither had officially separated from their spouses by that time.

The National Enquirer published Bezos’s lewd messages to Sanchez and said it had obtained a cache of nudes that were “so shocking we dare not print them”.

Bezos’s team launched an investigation into how the tabloid was able to get its hands on his private exchanges. This appears to be when digital forensic experts found that his phone had been hacked.

Lauren’s now-estranged brother Michael was reported by multiple outlets to have been the source behind the leak. Michael admitted that he had helped the Enquirer’s investigation but denied leaking the photos and texts.

Bezos’ longtime security chief, Gavin de Becker, wrote in the Daily Beast last March that he identified Michael Sanchez as the source paid by the Enquirer. However, he added, “our investigators and several experts concluded with high confidence that the Saudis had access to Bezos’ phone, and gained private information”.

He said he had provided details of the probe to law enforcement, but would not comment on how the hackers may have hijacked the phone.

AMI, the company that owns the Enquirer, denied that the Saudis helped them. Saudi officials have not spoken publicly on the matter.