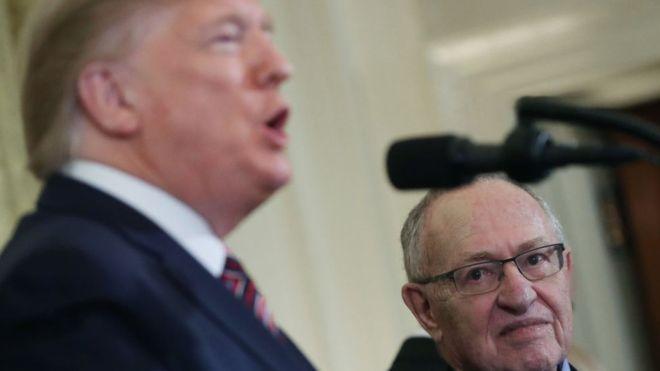 The White House now contends that the ongoing impeachment trial against President Donald Trump is invalid because Mr Trump has not committed any criminal acts. But this argument is deeply flawed, writes legal scholar Jonathan Turley.

Forty-five years ago, Cowboys quarterback Roger Stauback said: “I closed my eyes and said a Hail Mary.” The so-called Hail Mary pass is now a mainstay of American football where a quarterback, in the final seconds of a close game, throws the ball into the end zone on a hope and a prayer.

As the NFL play-offs wrap up and the Senate impeachment trial begins, Stauback’s strategy came to mind. The White House has decided to frame its defence around a constitutional Hail Mary pass in arguing that the impeachment itself is invalid because articles of impeachment must be based on alleged criminal acts. The “quarterback” in this play is Harvard Professor Alan Dershowitz who believes that the Senate should simply dismiss the case as constitutionally invalid.

Hail Mary passes make for great football but perfectly lousy impeachment trials. The problem is that this pass is not going into the constitutional end zone but well beyond the stadium.

The argument is based on a literal reading of the standard “high crimes and misdemeanors.” Those are criminal terms, to be sure, but they were never viewed as such by in England, where the standard was first forged, nor in the United States in past judicial and presidential impeachments.

American impeachments stand on English feet and English impeachments often stood on non-criminal allegations. Indeed in 1604, John Thornborough, Bishop of Bristol, was impeached for writing a book on the controversial union with Scotland. Michael de la Pole, Earl of Suffolk, was impeached in 1386 for such offenscs as appointing incompetent officers and “advising the King to grant liberties and privileges to certain persons to the hindrance of the due execution of the laws”.

Others impeachments were based on “giving pernicious advice to the Crown” and “malversations and neglects in office; for encouraging pirates; for official oppression, extortions, and deceits; and especially for putting good magistrates out of office, and advancing bad”.

The English standard was so vague and broad that the Framers were uncomfortable with replicating that process in the United States. Indeed, when the ongoing impeachment trial of Governor General Warren Hastings of the East India Company was raised by a Framer, James Madison immediately objected that the standard in the United States should not include terms like “maladministration” that would effectively leave presidents as serving “at the pleasure of the Senate.”

The result was the adoption of the English standard of “high crimes and misdemeanors” with a narrower scope of covered individuals (judicial and executive officers). However, it was never limited to criminal acts.

Limiting impeachment to the criminal code would have been a remarkable abridgment since there were crimes recognised at that time. More importantly, the Framers discussed the need to deal with violations of public trust and other non-criminal violations of a president. They wanted a narrower standard but not a purely criminal-based standard. If so, they could have simply stated so and made the criminal code the scope of impeachment.

Finally, such a standard would create a nightmare where a president could engage in outrageous acts and remain unimpeachable by staying just short of indictable. It is not surprising therefore that virtually every impeachment in US history has contained non-criminal allegations including the two presidential impeachments.

My disagreement with this argument puts me in a rather ironic position. During the impeachment hearing, I argued against four articles of impeachment being touted by the House leadership, including bribery. The problem is that the allegations against Trump fall well outside of definitions and case law of these crimes. While such definitions are not controlling, Congress has always looked to criminal cases on the meaning of such offenses.

The reason is simple. The criminal code offers an objective and neutral source for defining acts free from political manipulation.

Not only do such cases put a president on notice of the range of impermissible conduct, but it shows the public that the president is being held to a clearly defined and understood standard. Ultimately, I was relieved when the Committee rejected those four articles and went forward with the two articles that I testified would be legitimate, if proven.

Now I have the inverse concern with the White House argument. By framing this defense around this unwarranted interpretation, the White House is putting Republican senators in a terrible bind. Many will not want to catch this Hail Mary pass and simply pray that no president in the future will ruin the Republic with unimpeachable but noncriminal acts.

Jonathan Turley is professor of constitutional law at George Washington University He also testified with other constitutional experts in both the Clinton and Trump impeachment hearings.