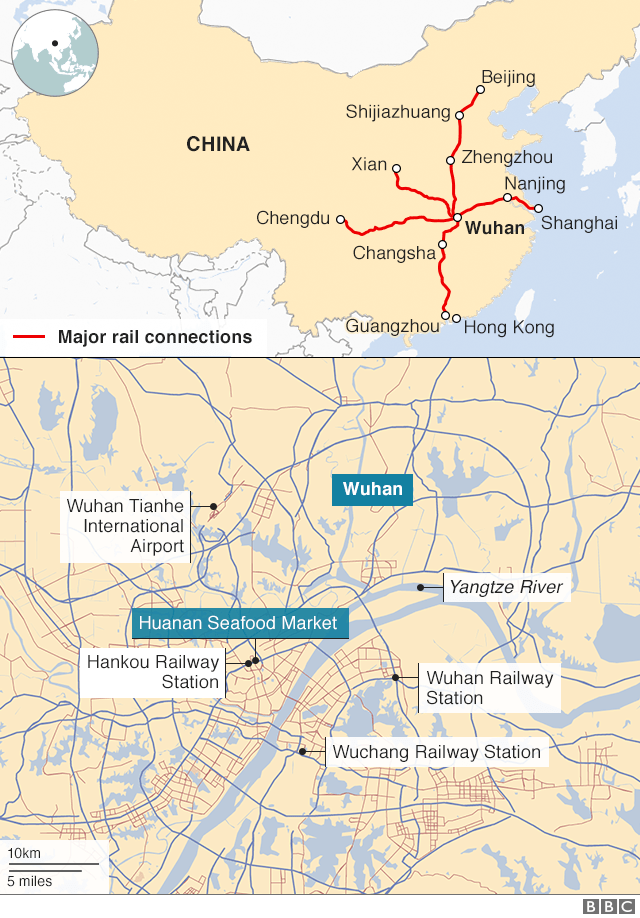 BBC.COM-Wuhan, a Chinese city of eleven million people, is to temporarily shut public transport as it tries to halt the outbreak of a new strain of virus.

Those living in the city have been advised not to leave, in a week when millions of Chinese are travelling for the upcoming Lunar New Year holiday.

The respiratory illness has spread to other parts of China, with some cases in other countries including the US.

There are more than 500 confirmed cases and 17 people have died.

Known for now as 2019-nCoV, the virus is understood to be a new strain of coronavirus not previously identified in humans. The Sars (severe acute respiratory syndrome) virus that killed nearly 800 people globally in the early 2000s was also a coronavirus, as is the common cold.

All the fatalities so far have been in Hubei, the province around Wuhan.

Meanwhile, after a day of discussions in Geneva, the World Health Organization’s (WHO) emergency committee has announced it will not yet declare a “global emergency” over the new virus.

Director general Dr Tedros Ghebreyesus said more information was needed about the spread of the infection. The committee of health experts will meet again on Thursday.

A global emergency is the highest level of alarm the WHO can sound and has previously been used in response to swine flu, Zika virus and Ebola.

What measures have been announced?

Chinese officials said that from Thursday, all flights and passenger train services out of Wuhan would be stopped.

Bus, subway and ferry services would also shut down from 1000 local time.

A special command centre in Wuhan set up to contain the virus said the move was meant to “resolutely contain the momentum of the epidemic spreading”.

Those living in Wuhan had already been told to avoid crowds and minimise public gatherings.

State news agency Xinhua said tourist attractions and hotels in the city had been told to suspend large-scale activities while libraries, museums and theatres were cancelling exhibitions and performances.

A Lunar New Year prayer-giving ceremony at the city’s Guiyuan Temple, which attracted 700,000 people last year, has also been cancelled.

The hashtag “Wuhan is sealed off” was trending on Chinese social media website Weibo.

The WHO’s Dr Ghebreyesus described the latest measures as “very strong” and said they would “not only control the outbreak, they will minimise spread internationally”.

Chinese officials said the country was now at the “most critical stage” of prevention and control.

“Basically, do not go to Wuhan. And those in Wuhan please do not leave the city,” said National Health Commission vice-minister Li Bin in one of the first public briefings since the beginning of the outbreak.

Wuhan is starting to look like a city in quarantine.

Officials had already warned residents not to leave the city and visitors not to come.

Now the reported public transport ban – which includes flights – slams many of the routes in and out of the city shut.

It is a significant attempt to stop the spread of this new virus, which we now know can spread from person to person.

Limiting transport will cut the chance of the virus reaching other cities in China and other countries around the world.

This all comes just as millions of people are travelling across China for the week-long holiday that is Lunar New Year.

If you’re struggling for context – imagine shutting down London in the week before Christmas.

The big question left is the roads – and whether any of Wuhan’s 11 million inhabitants will be able to simply drive away.

Officials in Hong Kong reported the territory’s first two cases on Wednesday and one case was reported in the nearby city of Macau.

The patient in Macau is said to be a businesswoman who arrived from Wuhan over the weekend.

The first US case was confirmed on Tuesday. President Donald Trump said the situation was “totally under control” and that he trusted the information being provided by Chinese authorities.

There have been three cases in Thailand, one in Korea, one in Japan and one in Taiwan.

Although only about 500 cases have been confirmed, calculations by scientists at the MRC Centre for Global Infectious Disease Analysis at Imperial College London suggest there are 4,000 people sick with the virus in Wuhan.

Our estimate at 4,000 cases is more than double the past estimate due to increase of number of cases outside China. This should not be interpreted as implying the outbreak has doubled in size.

What do we know about the virus?

The virus originated in a seafood market in Wuhan that “conducted illegal transactions of wild animals”, authorities said. The market has since been shut down.

There is also evidence of human to human transmission with the new virus spreading to family members and healthcare workers.

But understanding how easily and how often the virus spread between people is one of the major outstanding questions in this outbreak.

The virus infects the lungs and symptoms start with a fever and cough. It can progress to shortness of breath and breathing difficulties.