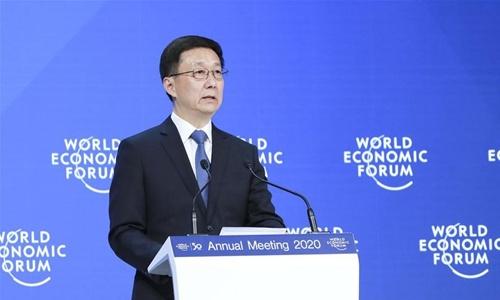 Chinese Vice Premier Han Zheng, also a member of the Standing Committee of the Political Bureau of the Communist Party of China Central Committee, delivers a speech titled “Work Together for an Open World Economy and Sustainable Global Development” at the 50th annual meeting of the World Economic Forum in Davos, Switzerland, Jan. 21, 2020. (Xinhua/Pang Xinglei)

On its 50th year, the World Economic Forum is being held from Tuesday to Friday. US President Donald Trump and Chinese Vice Premier Han Zheng have delivered speeches at the forum’s annual meeting in Davos. The forum has turned into an important international platform for various countries’ policy makers and business executives to communicate with each other, and also a vital gateway for China to observe, understand and participate in the real world.

Trump hailed “extraordinary” achievements the US has made in the past three years, saying the US is “in the midst of an economic boom the likes of which the world has never seen before.”

He congratulated himself in an exaggerated tone as he always does: “The American Dream is back – bigger, better, and stronger than ever before.”

Trump seemed to be taking advantage of the Davos meeting for his reelection campaign.

Trump praised US-China relations, which according to him have “probably never been better.” He continued, “We went through a very rough patch, but it’s never, ever been better.” Trump didn’t say anything about “America First,” nor did he attack other countries in his speech. “This is not a time for pessimism; this is a time for optimism,” Trump noted, saying the US “will join the One Trillion Trees Initiative” that was launched during the forum.

To what extent his remarks reflected the real situation of the US economy and the changes in policies in Washington still need further observation. However, this year’s Davos meeting is focused on climate change and environmental protection, and what we have learned from the event is worrisome.

According to the forum’s “Global Risks Report 2020,” more than 78 percent of over 750 respondents, who are experts and decision-makers, are concerned that the risk of economic confrontations and domestic political polarization will increase in 2020. To face the challenges, systems-level thinking and integrated solutions are required.

Top leaders of some countries such as Germany and Britain didn’t participate in this year’s Davos meeting. British Prime Minister Boris Johnson even banned his Cabinet from attending Davos so as to shed the Conservative Party’s reputation as the party of billionaires.

Through the event, we can generally perceive what the world is like.

Many countries have encountered difficulties in governance and development and even faced crisis but have limited methods to deal with the crisis. Globalization is at a crossroads with increasing difficulty for people to reach consensus.

As the report points out, economic confrontations and domestic political polarization are the two major problems humanity faces. However, although split and confrontations have intensified, the world hopes to cooperate, needs cooperation, and has never given up efforts to cooperate. Economic nationalism and trade protectionism have never been popular around the world, and we can confirm this from Davos.

It is worth pointing out that China has been like fresh air in Davos since it first participated in 1979. As China’s national strength grows, the country has played an increasingly more positive role in Davos.

The 50 years of Davos reflects the process of China integrating into the world and how the country and the world have mutually shaped each other. China probably can and has brought more certainty than Trump to the world.