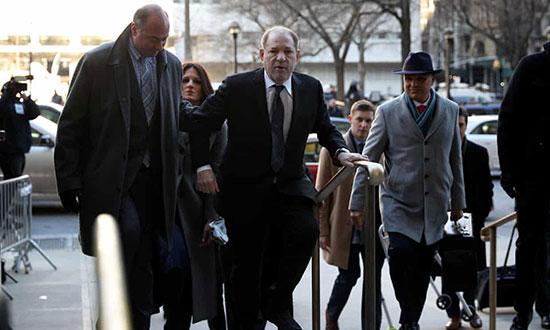 New York prosecutor describes allegations of the women, who she says were ‘groomed’ before Weinstein assaulted them

Harvey Weinstein was a savvy New York businessman and famous Hollywood producer who used his power and the promise of his largesse within the film industry to groom a succession of naive and inexperienced women – who he went on to sexually assault and in some cases rape, state prosecutors alleged on Wednesday.

In an opening statement lasting over an hour, New York prosecutor Meghan Hast delivered a devastating and at times shocking account of Weinstein’s alleged attacks on six women who will testify at the fallen mogul’s trial in Manhattan.

Pointing at the defendant just feet away at the defense table, staring back at her, Hast proclaimed to the jury: “That man was a sexual predator and a rapist.”

She described in searing detail the allegations of the six women, many of whom harbored aspirations in the movies but only one of whom actually enjoyed success.

The majority of the accusers, the prosecution suggested, were unknown and vulnerable individuals who gladly accepted Weinstein’s advances in the hope of an acting break.

At numerous occasions in the opening statement, Hast talked about the women having “passed Weinstein’s test”. She implied he “groomed” the women, negotiating them into situations in which he suddenly turned violent and attacked them unexpectedly.

“Different women, from different places, decades apart faced the same crimes,” Hast said. “At the end of this trial the evidence will be clear that the man seated right there was not a titan in Hollywood, he was a rapist.”

Weinstein is facing five counts, including two counts of rape and one count that he performed oral sex on a woman without her consent. The two other charges are that he committed predatory sexual assault, accusing him of a pattern of non-consensual sex, which carries a maximum sentence of life in prison.

Of the six state witnesses, two form the heart of the case. Hast ran the jury through the basic details of the accusations raised by both.

The first was an English-born woman described as having had a tough childhood, leaving home to fend for herself in the early 1980s. She met Weinstein at a London film festival in 2004 having been introduced to him by another legendary film producer, Michael White.

Two years later, the woman travelled to the Cannes film festival in the hope of securing work in production, where she met Weinstein again and asked him if he had any job openings. He invited her to his hotel suite where, after some business talk, he became sexually suggestive and asked for a massage, which she declined.

Soon after, employees contacted the woman again and invited her to work for the TV show Weinstein was involved in, Project Runway. When the woman agreed to take up the role, the prosecutor said: “For Harvey Weinstein she had passed the first test.”

Hast went on to describe an incident on 10 July 2006 in which Weinstein allegedly forcibly performed oral sex on her in his apartment in New York’s SoHo neighbourhood. She had gone there expecting a business conversation but the tone suddenly changed, the court heard.

Weinstein “dramatically changed without warning”, Hast said. “The defendant, who at this time is almost 300lb lunged towards the 115lb woman and began to grope her. She told him ‘I’m not interested’.”

But having forced her into the bedroom and on to his bed “he put his weight on top of her and held her down. She kept saying no, kept trying to get up … but the defendant put his mouth on her vagina. She told him she had a tampon in. He yanked it out and continued orally sexually assaulting her.”

The prosecution also outlined the accusations of a woman whose identity was unknown until it was revealed in court on Wednesday. Hast described how the woman was allegedly raped by Weinstein in 2013.

“Realizing the danger of the situation, she relented and got undressed … He got on top of her and raped her, forcing his penis into her vagina.” The alleged victim “just lay there”. Later in the bathroom she found a needle and a vial of chemical which she Googled and discovered to be an erectile dysfunction medicine.

In the aftermath, the woman was so racked by shame and fear that she “contemplated suicide”, Hast said.

At one point in the presentation, when Hast was describing Weinstein as a predator, he sat listening to her, chuckling dismissively and shaking his head.

Damon Cheronic, a lawyer for Weinstein said: “This case doesn’t hold water because it is not true. Harvey Weinstein was not a master manipulator, that’s a line from a movie that you are not going to see.”

Cheronis put up on screen a number of emails and texts from the women testifying that implied warm relations with the defendant even after the alleged attacks.

One reminisced fondly with Weinstein about their earlier encounters and asked whether he could meet her in London. But when New York Times and New Yorker articles about Weinstein were published in October 2017 she changed tack and employed the sex crimes attorney Gloria Allred, Cheronis said.

Allred represents two of the accusers involved in the trial.

The only successful actor among the trial accusers is Annabella Sciorra, who starred in the Sopranos TV series. The prosecution related an alleged attack that happened at her New York home in the winter of 1993 to 94.

Hast screened a photo of Weinstein smiling and smoking, from around that time. “She was 110lb. He was close to 6ft tall and almost 300lb. The defendant grabbed her and pushed her on to the bed. He pinned her arms under her head and continued to hold her down as he inserted his penis in her vagina and raped her.”

He proceeded to perform oral sex on her against her will. “Annabella remembers not having any fight in her. Her body wasn’t able to endure any more and she began violently shaking. The defendant had finally had enough and he left her emotionally and physically destroyed.”

A few years later at the Cannes film festival Sciorra was allegedly accosted again in Weinstein’s hotel room. To her horror, she found him in his underwear, with baby oil in one hand and a videotape in the other.

Outlining another’s account, Hast said that in 2004 Weinstein lured the woman to a hotel room, where she went in hope of securing a movie role. When she entered he was naked.

He pointed to three film scripts and suggested she could take her pick if she would “be kind” to him . She tried to laugh it off, but Weinstein allegedly yelled: “This is how the industry works. How do you think other actresses got ahead?”

At the end of the day’s proceedings, one of Weinstein’s lawyers, Arthur Aidala, called for the trial to be scrapped. He argued that the prosecution’s description of the defendant as a “predator” and a “monster” was inappropriate and had tainted the jury.