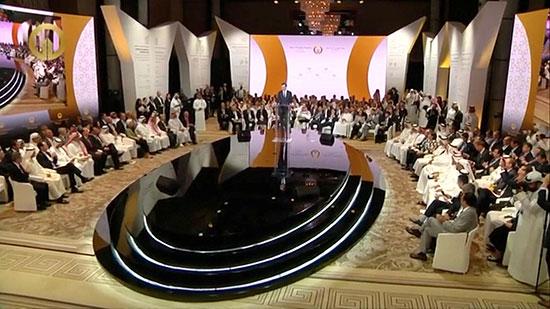 A Palestinian state with no military, control of border or alliances, Israeli sovereignty over all settlements and all of Jerusalem, and no deadline – are some controversial details from the Deal of the Century

Senior government officials say the details of the long-awaited Trump peace plan that are coming to light were presented to Prime Minister Benjamin Netanyahu in the past weeks and the invitation to Washington for a presentation was arranged in coordination with him.

Netanyahu said he asked that Blue & White leader Benny Gantz be invited as well, possibly in order to foil any opposition from Gantz to the proposed plan.

The invitation next week coincides with Knesset deliberations on the immunity from prosecution requested by Netanyahu, who is facing charges of bribery, fraud, and breach of trust.

Trump tweeted he is looking forward to welcoming the Israeli leaders to Washington.

The president also said the information reported by the media detailing parts of the plan is incorrect.

Israeli sources who have seen the plan say Israel will be annexing 30% to 40% of Area C today under Israeli civil and security control, in parts of the area Israeli sovereignty will be extended to the settlements only, including those outside the settlement blocs and in other areas Israeli rule will include the entire territory.

The U.S. plan suggests Israel immediately extend its sovereignty to all but 15 West Bank settlements to create territorial integrity.

Leaders of the settlement movement and West Bank communities were mistaken to think Netanyahu was only interested in annexing the Jordan Valley.

The peace plan also leaves Jerusalem in its entirety in the hands of Israel with the Palestinians given only symbolic access to the city.

Palestinians will finally be given their own state though it will be severely restricted. It will not be allowed to have an army, will not be permitted to forge alliances with other countries and will have no control of its air space or borders.

The Palestinians will also be required to demilitarize the Gaza Strip and disarm its Hamas rulers.

The American plan also suggests a land swap to compensate the Palestinian for some of the territory they stand to lose.

The administration believes the economic plan unveiled in the Bahrain conference in June, will incentivize the Palestinian people who will demand their leadership sign on to the Deal of the Century.

Sources close to the White House say Jared Kushner had enlisted Sunni countries to pledge $50 billion for the Palestinian Authority.

The Trump peace team set out to erect a firewall between the Palestinian leadership and moderate Arab countries in order to foil any attempt to block the proposed plan.

Leaders like the Saudi Crown Prince Mohammad bin Salman were reported to say the had previously waisted money on the Palestinians but that will now change.

The difference between earlier peace plans and the Trump plan is that there are more than two partners to the proposed deal. With the Gulf leaders on board, the Palestinians will not be able to create a false narrative.

“The past plans were theatre that caused nothing but violence and death,” American officials said, “This plan has no dead-line, it will require patience.”

Israeli officials though say there is no option of a peace plan with just one of the sides to the conflict on board.

The administration has been trying to enlist rightwing opinion-makers to support the plan. They are primarily concerned with the reaction of Defense Minister Naftali Bennett who has already come out against the establishment of a Palestinian state.