TEHRAN (FNA)- Iranian Foreign Minister Mohammad Javad Zarif underlined Tehran’s preparedness for talks with neighbors and participation in any synergic efforts to the benefit of region.

“Iran is still interested in negotiations with its neighbors. We declare our readiness to participate in any synergic effort to serve the interests of the region,” Zarif wrote on his twitter page in Arabic on Thursday.

In an interview with Reuters in Davos, Switzerland, Faisal said Saudi Arabia was open to talks with Tehran “but it is really up to Iran”.

Different countries including Pakistan and Qatar have voiced readiness to mediate between Iran and Saudi Arabia to ease regional tensions.

Iran has repeatedly announced its readiness to hold negotiations with Saudi Arabia to clear up misunderstandings and to avoid interferences of trans-regional powers.

The wurst is over: why Germany now loves to go vegetarian 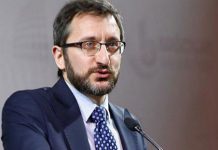 EU sanctions on Turkey would be ‘irrational’, says communications director