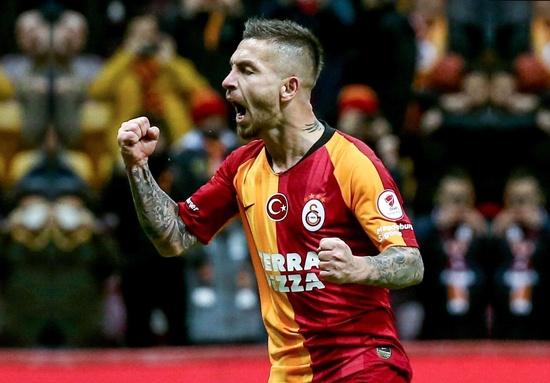 Galatasaray advanced to the quarterfinals in the Turkish Cup, after beating Çaykur Rizespor 2-1 at Türk Telekom Arena on Jan. 23.

Galatasaray eliminated Çaykur Rizespor 3-2 on aggregate after a 1-1 draw in the first leg of Round of 16 last week.

After a goalless first half, Galatasaray broke the deadlock in the 60th minute, when Adem Büyük converted the awarded penalty kick, giving his team a 1-0 lead.

The resilient Rizespor team did not give up on their chances, they also managed to convert their penalty kick, Oğulcan Çağlayan made no mistake in the 77th minute.

Galatasaray, increasing the pressure on Rizespor defense, found the winning goal from a corner kick, when Gabonese midfielder Mario Lemina’s header defeated the defense and the goalkeeper in the 82nd minute.

Rizespor could not answer in the remaining minutes, as Galatasaray advance to the next round.

In another match of the Turkish Cup action on Jan. 23, Trabzonspor eliminated Yukatel Denizlispor 4-2 on penalties at Denizli Atatürk Stadium.

Trabzonspor eliminated Yukatel Denizlispor 4-2 on penalties after the second leg match ended 2-0 in favor of Denizlispor, equalizing the tie 2-2 on aggregate.

Goalkeeper Erce Kardeşler saved the first penalty, as Trabzonspor hit all their penalties.

Denizlispor’s fourth penalty shot hit the crossbar, and Trabzonspor advanced to the next round.

Results in Round of 16 of Turkish Cup