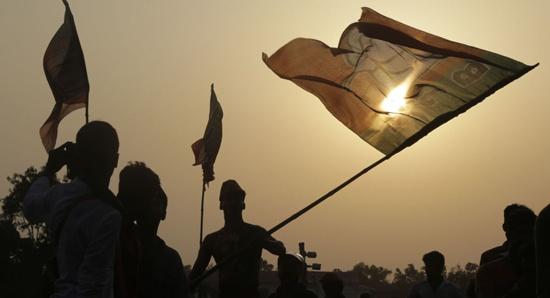 New Delhi (Sputnik): As campaigning for the upcoming legislative assembly elections in India’s national capital heats up, verbal battles, Twitter spats, and political bickering have come to the fore. The main contestants are from the governing Aam Admi Party, the federal governing BJP, and opposition Indian National Congress.

India’s Election Commission has sought a report within 24 hours from the regional election authority on a tweet posted by Bharatiya Janata Party (BJP) candidate Kapil Mishra.

Mishra took to the micro-blogging platform on Thursday to equate the upcoming elections in Delhi to an “India-Pakistan Match”.

He alleged that the ongoing protest against a controversial citizenship law was being sponsored by Pakistan and several “mini-Pakistans” were being created in Delhi, saying the governing Aam Aadmi Party (AAP) and opposition Indian National Congress were responsible.

The returning officer from the Model Town Assembly constituency, from where Mishra is contesting the election, has asked for an explanation from him, warning that if no response was received by noon Friday, “action will be taken without any prior information”.

Reacting to the notice from the election authority, Mishra reiterated his claims and alleged that “Roads are encroached upon in Shaheen Bagh, people aren’t being allowed to go to schools, offices, hospitals, inciting slogans are being raised”.

Delhi will go to the polls on 8 February to elect a 70-member provincial legislature and the counting of votes will occur on 11 February.

Kapil Mishra was earlier sacked from the Water and Tourism Ministry in the cabinet headed by bureaucrat-turned-politician and chief of Delhi Arvind Kejriwal. He joined the BJP after he was disqualified by a court under the anti-defection law. The Indian Constitution provides for disqualification of any elected representative, if the member defects to any other party or voluntarily gives up membership in a party, or disobeys the directives of the party leadership on a vote.

India has witnessed widespread protests against the federally enacted Citizenship Amendment Act, 2019 (CAA) as several opposition parties and civil rights activists claim that the law discriminates against Muslims and violates the provisions of the Constitution.

The amendments to the Indian Citizenship Act, passed by the Parliament on 13 December grant citizenship to illegal immigrants from several religious miniorities – Hindus, Sikhs, Christians, Buddhists, and Parsis from Pakistan, Bangladesh, and Afghanistan who faced persecution at home and arrived in India before 2015.

Prime Minister Narendra Modi and federal Home Minister Amit Shah have clarified that the law in no way affects any current Muslims citizens, but only provides citizenship to persecuted members of the minority communities from the three neighbouring Islamic countries.