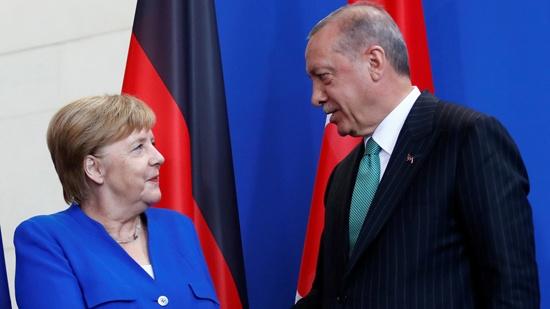 They may be all smiles for the cameras, but the issues Angela Merkel and Recep Tayyip Erdogan are set to discuss – from Syrian refugees to Turkey’s attempts to join the EU – may stall talks and deteriorate relations even further.

And both sides have more to play for this time round than political point-scoring.

The festering wound of Syria continues to provide pain for Turkey, which already hosts 3.7 million Syrian refugees. Now the prospect of further trouble around the city of Idlib means more migrants could be heading Turkey’s way in the not too distant future as they flee the mayhem.

And while Turkey came to the rescue of a panicked EU during the last major migrant push from the war-torn hellhole that is Syria, the promises made at the time by EU leaders in order for President Erdogan to play ball have simply not been fulfilled.

So the German chancellor finds herself on the way to Ankara for talks with the Turkish hardman, a gambit the EU hopes will be more conciliatory than sending, say, Emmanuel Macron.

Because high on the list will be four questions, in no particular order: first, where is the rest of the six billion euros you promised us last time to help deal with this influx of migrants; second, what happened to the visa-free travel deal you mentioned for Turks wanting to travel to the EU; third, where are we with Turkish accession to the EU; and finally, what’s happening with the weapons exports ban?

The first issue is easy enough. Merkel just needs to make the outstanding payment guarantees that Turkey is seeking and it’s ‘job done’. After all, why let 3.7 billion euros come between friends?

As for the second matter – visa-free travel – well, that’s a tricky one. The way the EU would look at it is this: Turkey is a nation of 80 million people. What if they were all granted visa-free travel throughout Europe? We need some more time on this one.

Because that could lead to issue number three: accession to the EU. You’d think the Turks would have given up, remembering they first made their application to become an EU member back in 1987. But no, they persist.

Accession would not only bring with it trade and free movement of people, it would also see Europe’s borders moved right up to Iran, Iraq and Syria. Boris Johnson used the idea of Turkey’s EU accession as a scare tactic during the Brexit referendum. While he had to ride out the race storm that followed, there is no doubt that it was a very effective threat.

Now that London’s views don’t carry the same weight in Brussels as they once might have, don’t think there is a softening on Turkey’s accession. The idea sends a chill wind through the grey corridors of the European headquarters.

Not that anyone needs to tell Angela Merkel much about the resistance to immigration from the East. After 14 years as the first female chancellor, and with an amazing story for a modest scientist born in East Germany, it is most likely she will be remembered for opening the immigration floodgates to her country in 2015, which saw one million refugees arrive – mostly Syrian – in the largest immigration influx since WWII.

She needs to ensure the cooperation of the Turkish president to make sure that does not happen again, because that would guarantee her time in office was remembered not for her achievements, but for a catastrophic misreading of her nation’s mood.

So the final issue, of weapons exports, might be the card to play. Germany imposed the partial ban in October (despite selling it as something a bit harsher), but as arms sales to Turkey topped 250 million euros in the first half of this year and the reason for it – that the Turks would use the weapons against Kurdish fighters – is no longer an issue, perhaps lifting restrictions would provide a bit of leverage.

Erdogan knows the strength of the cards he holds. He’s already suggested in the past that he might simply unleash migrants into the EU unless their deal was honored.

Meanwhile, feelings still run high over the abrupt cancellation of political rallies organized in Germany by Turkish ministers aimed at addressing their huge immigrant communities ahead of a referendum in Turkey. That spat saw Erdogan accuse German authorities of “Nazi” tactics – not an accusation ever received lightly in Berlin.

Will these harsh words be forgotten? Most likely. Both sides have far too much at stake now to let a bit of name-calling get in the way. And while the more recent issue of Turkey’s dispatch of the Kurds in Syria is still a bone of contention, it is that issue of Syria that will actually bring the two leaders together.

As these two leaders meet, what can we realistically expect? Some conciliation over the cash payments to Turkey from the EU, most likely in a further installment of the six billion Euros. While on the money front, perhaps an easing of arms exports restrictions from Germany and maybe other EU nations.

Expect promises of further investigation into visa-free EU travel but nothing concrete for now. As for the accession to the European Union, with tiny Albania and Macedonia being knocked back on their bids to join this club and a genuine resistance to expansion evident in powerful quarters, what hope does a nation of 80 million people directly bordering some of the world’s most troubled regions realistically have of being given a dream ticket?

President Erdogan doesn’t even need to ask to know the answer there.